UPDATE: The storm total rainfall for Arlington Heights ended up being 3.8 inches.

Arlington Heights received about 1.1 inch of rain from 10:00 p.m. Tuesday July 11, 2017 until 3:15 a.m. Wednesday July 12, 2017 measured on a rain gauge. Parts of Lake County have received 4-5 inches of rain overnight by radar estimated rainfall imaging, according to the National Weather Service Chicago.

Following are reports mostly after 3:15 a.m.

Two cars were reported submerged by firefighters on the scene at Lincoln and Division in Mundelein about 4:00 a.m.

Firefighters received a report of a female holding on to a green semi-trailer truck stranded at Route 41 and Route 176. She was unable to walk or swim to unflooded land. Firefighters were updated that a man and a woman were seeking refuge from high water on top of the semi-trailer truck. Nearby water is reported to be as high as the Elgin, Joliet and Eastern Railway bridge over Route 41.

On Garfield Avenue in Libertyville, a resident reported 7 feet of water depth in their basement with an electrical panel completely submerged.

There was also some flooding reported at the new hospital building at the Northwestern Lake Forest Hospital campus in Lake Forest.

Firefighters responded about 5:33 a.m. Wednesday to a house on Lange Court(?) where a resident reported their gas fireplace ignited because of flooding in the basement. The fire was contained to the gas fireplace. 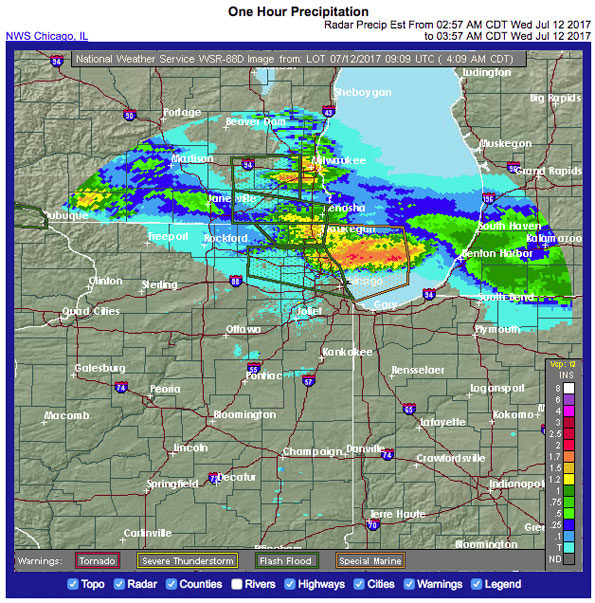 Rainfall from 3AM to 4AM this morning. 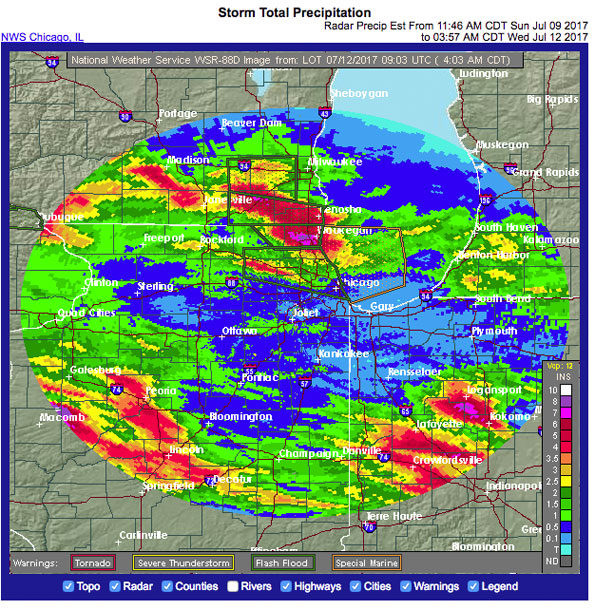