The offender or offenders fled scene, possibly westbound on Randville Drive. Two teen victims were down in the street near the curb. Witnesses said they were sitting under a pine tree when possibly five to eight teens or young adults approached briskly, and fired shots. Witnesses heard five to six shots.

A second ambulance was immediately dispatched at 10:53 a.m. — Ambulance 83 was assigned.

Saleha Masood heard five shots, but didn’t see the shooters. She looked outside and saw two teens down in the street. She rushed downstairs and brought some water to help the shooting victims. She said one of the victims had three gunshot wounds and that his leg was broken. She could see the shaft of his bone exposed. She said she helped put something on his wounds to control the bleeding.

Saleha Masood said both victims were conscious and were male/Hispanics speaking Spanish. She described the victims as high school kids.

Arlington Heights police assisted with a K-9 unit, as Palatine police investigated the scene and worked to gather evidence.

Virginia Lake and Jane Addams schools in Palatine Elementary District 15 were in soft lockdown, as well as Palatine High School in Palatine-Schaumburg High School District 211. Students and staff were permitted to move about inside the school building like a regular school day inside, but staff, students and visitors were not allowed to enter or exit the buildings. P

As of 2:00 p.m., lockdowns had been lifted and all students and staff were reported safe. 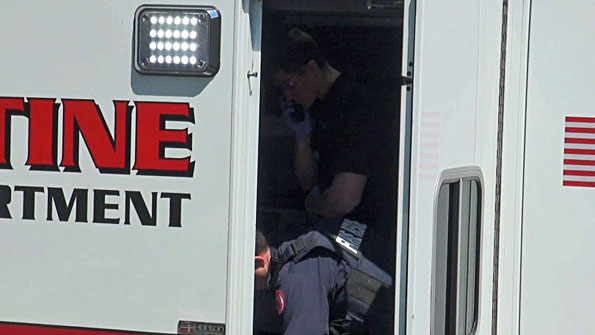 Palatine firefigher/paramedics treating shooting victim in back of ambulance on Randville Drive. 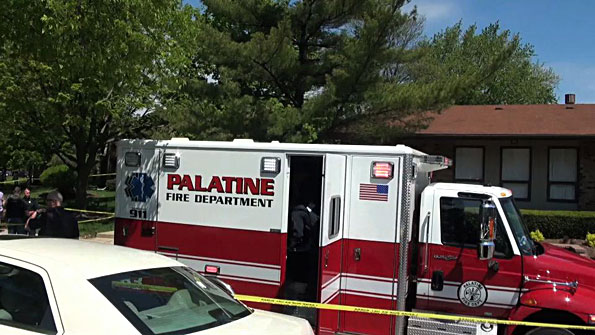 MORE PHOTOS at scene and at Palatine High School lockdown …

LIVE TRAFFIC MAP of neighborhood to a report of a shooting in the block of 1100 E Randville Dr, Il (In This Block) …