The Arlington Heights village board late Monday night voted 5-4 Monday to opt out of Cook County ordinances raising the minimum wage and mandating businesses to pay employees for sick days. The current Illinois minimum wage is $8.25. As of July 1, the new minimum wage in Cook County will be $10 per hour, then $11 per hour on July 1, 2018; $12 per hour in 2019; and $13 per hour in 2020. For July 1, 2021 and beyond, an inflation-adjusted minimum wage calculated by the Cook County Commission will be announced on the commission’s website by June 1 of each year.

The sick leave ordinance will require most private employers in Cook County to offer up to five days of paid sick leave a year.

Ordinance No. 16-5768 passed by the Cook County Board of Commissioners on October 26, 2016. Effective July 1, 2017, this ordinance will increase the minimum wage for many employees in Cook County to $10/hr.

Supporters of the increased minimum wage also advocated for mandatory paid sick leave. Supporters of the Cook County Sick Leave ordinance argued that the ordinance will reduce the spread of illness, especially at restaurants where sick and contagious workers may be more likely to come to work while sick.

Board members heard hours of pleas from citizens for support of Cook County rules. A total of 30 people addressed the board before the vote Monday night, most presenting data and stories that support the county ordinances.

Arlington Heights Chamber of Commerce Executive Director Jon Ridler urged board members to opt out. A small number of business owners publically agreed with the opt-out.

During Village Board deliberation, Trustee Tom Glasgow expressed concern that he wouldn’t want to risk the Vail Avenue Jewel-Osco closing in downtown Arlington Heights, which serves a large senior population. Glasgow explained that if Arlington Heights didn’t opt out, executives at Jewel could experience more financial difficulties, compared to the neighboring Rolling Meadows Jewel-Osco, where Rolling Meadows has already opted out. Glasgow said he was concerned (as a hypothetical example) about a potential decision to close the Arlington Heights Jewel-Osco, if it couldn’t remain profitable. Glasgow referred to Jewel-Osco executives that have already expressed concern about pressures they would face from a higher minimum wage. Glasgow described Arlington Heights as a long, thin municipality that is vulnerable — eight miles long and, at any given spot, about a mile-and-a-half wide. He said it is easy for a business to move to another district with less expenses, and still serve the same population in Arlington Heights. Glasgow also mentioned that municipalities where the minimum wage ordinance has been imposed are very big geographically.

Glasgow also expressed concern that business owners were reluctant to reveal their opinions, fearing retribution. Glasgow said he had received a phone call from a business owner because “they” felt their free speech was squelched because they didn’t want to be pilloried by people that thought differently … they didn’t want to be worried about the effect that their opinion might have on their business.

Glasgow said he understood the social justice of this issue, but also described the dismal condition of the State of Illinois with business and citizens leaving Illinois. Glasgow stated that in 2014 Illinois population dropped 11,961 people, which doubled in 2015, and then went over 37,000 in 2016. Glasgow said he can’t ignore places like Kraft, Hoist Lift Truck, Motorola, Caterpillar, General Mills “all which have left the state.” Glasgow added that he can’t ignore the fact that Illinois was rated the most horrendous state in which to do business — ranked 48th out of 50, or that “it’s like doing business in a third world country” according to some businesses.

Hayes and other trustees voting to opt out expressed their concern that their conscience would not let them hurt local business by enforcing a higher wages, while advocates of the Cook County proposal said there is no empirical evidence that shows the higher minimum wages hurt prices. Rosenberg and Scaletta emphasized that businesses would simply rise the prices on the store shelves. A $1.00 soda might rise to $1.65, for example.

Their messages drew some moans and groans from the advocates of the Cook County ordinance.

Trustee Bert Rosenberg’s comment about a payroll service company’s comment drew some jeers. Rosenberg was told that adjustments necessary for them to comply with the new ordinance will be an unbelievable task.

The crowd then asked for comment from Richard Baldino, who had not volunteered any comments for deliberation.

“To have a patchwork of minimum wage laws, especially in the county or Northwest suburban area, is anti-business,”

Monday night was Baldino’s first night on the board, and several incumbent trustees agreed the night’s Cook County ordinances decision was the most difficult they have seen during their service as trustees.

Mike Sidor, Robin LaBedz, Carol Blackwood, and Richard Baldino, who voted against opting out, stressed the number of constituents that communicated with them in support of the Cook County ordinances — instrumental in their decisions.

Trustee LaBedz explained that she agreed the decision should be handled by the federal or state government, but that she doesn’t see any action happening soon. LaBedz said the ordinances may not be perfect, but that we can’t let the perfect be the enemy of the good; it can’t wait for the state or federal government … and that change has to start somewhere … and that it will start today with her not voting to opt out.

Prior to the board’s deliberation, Erik Varela, special assistant in Cook County Board President Toni Preckwinkle’s office, read a letter from Preckwinkle to Arlington Heights officials expressing her disappointment in towns that have opted out. She wrote that their “spirit of cooperation is lacking” despite the county’s collaboration on business tax incentives and transportation investments. 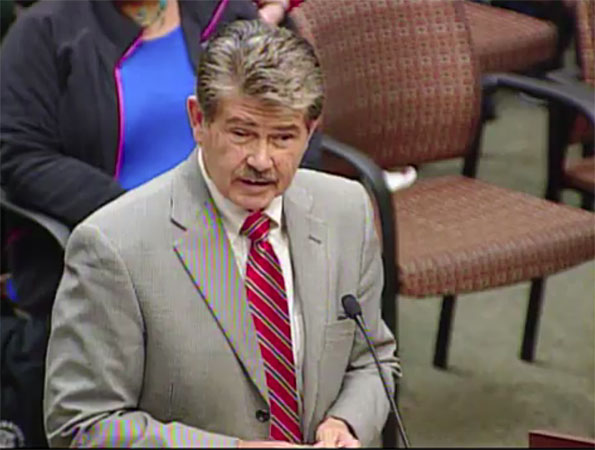 “There’s nothing wrong with treating people who do some of the toughest work in the world with a little bit of dignity and respect.”

Cook County Clerk David Orr, who attended a rally before the village board meeting and spoke before the board during the board meeting, cited statistics that 65 percent of Arlington Heights voters supported a higher state minimum wage and 75 percent favored paid sick days in non-binding referendums. During the village board meeting’s blue card session, some advocates expressed data that showed that there were a lot more constituents supporting the ordinances than there were constituents supporting any candidate — about 32,000 to 5000.

Arise Chicago, which held a rally Monday night May 1, 2017, also organized a rally before the March 20 village board meeting when trustees were initially expected to vote on opting out of the Cook County Ordinances. On March 20, 2017, Mayor Tom Hayes proposed any decisions be delayed until May 1, 2017 to allow more time to hear from constituents. Hayes credited the board with listening to over 3 1/2 hours of citizen input. Many constituents afterwards felt the board already had their minds made up. 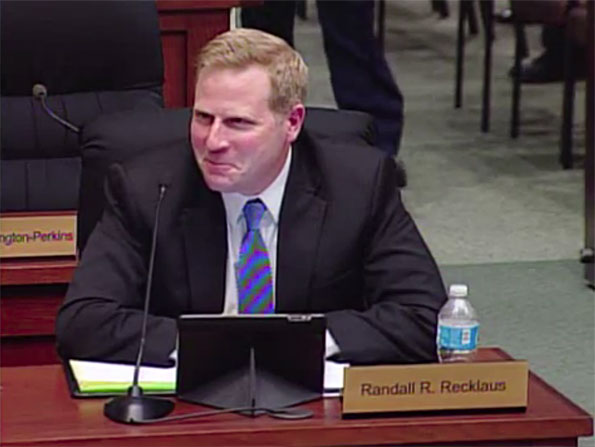 Following the Cook County ordinance there was some heckling of the board as advocates of the Cook County ordinance were exiting the meeting. When Mayor Hayes, moved on with the agenda, he asked the Village Manager Randall Recklaus for the the Report of the Village Manager. Mr. Recklaus answered “Nothing further to report, Mayor,” while smiling and laughing. Another unidentified voice on a personal mic asked, “Are you sure?” [Recklaus and others laughing] “Don’t you have something?” [More laughter.]