Wheaton Police Department is investigating the death of 19 year-old Ethan Roser, the Wheaton College student who died Saturday after being struck in the head during a hammer throw event. He was standing off the field of play at Lawson Field during pre-event warmups when the accident occurred, police said Monday.

Ethan Roser was a freshman at Wheaton College from Loveland, Ohio, and was volunteering at a CCIW track and field event hosted by the college when he was struck by an errantly tossed 16-pound hammer at about 4:10 p.m. He was transported to Level I Trauma Center Advocate Good Samaritan Hospital in Downers Grove, where he was pronounced dead at 5:17 p.m.

The DuPage County coroner’s office said Monday the preliminary cause of death was related to head trauma.

Wheaton police said their investigation is continuing “to provide a clearer picture” of the events leading to Ethan’s death.

Lawson Field, just north of the Wheaton College campus, is the size of a city block and is about 360 feet by 600 feet.

In the hammer throw event, competitors throw a 9-16 LB metal ball which is attached to a 3- to 4-foot handle. The player holds the handle with both hands, makes several turns to build up angular speed and angular momentum and releases the entire hammer (metal ball and wire), which flies in a straight, parabolic trajectory. Both the metal ball and the wire become dangerous projectiles.

The competitor stands in a cage open at the top and front, but is designed to control, minimize, or stop errant throws that might go off to the side or rear.

In the men’s event known as the Hammer Throw Event, the athlete is at a remote distance from the observed and recorded target area. However, errant throws can expose spectators, officials and other athletes to risk of serious injury at much closer distances, or at the greater target distance.

NOT FIRST IN DUPAGE …

In 1981, a graduate of Northern Illinois University was hit and killed at North Central College at an Illini Classic track and field meet. On Saturday April 18, 1981, John Tucker, representing the University of Chicago Track Club, was 20 to 30 yards to the right of the protective cage when he was hit by an errant throw that went high through the opening at the top of the cage and landed off to the side of the cage. The thrower slipped while he was warming up. Tucker was tying his shoes when he looked up and was hit in the head. John Tucker was transported to Edward Hospital in Naperville, and transferred to Good Samaritan Hospital in Downers Grove where he later died on Tuesday April 21, 1981.

Although all throwing events present the danger of serious or even fatal injury, the hammer throw is the single most dangerous event to officials and people around the site of the venue. Impact from an in-flight hammer, or even wire, will almost certainly result in serious or even fatal injury. One caution given to retrievers and officials at this event is that the ball of the hammer, due to its high velocity, will destroy what it hits. Even the wire, due to the speed of rotation, can cut someone like a sword if they are hit in-flight.

The National Throws Coaches Association publishes the Throws Safety Certification Handbook and is used for a safety certification program. The handbook publishes information about safety of adjacent competition areas.

The safety handbook also recommends designating four zones for the throwing areas for discus, javelin, shot put and the hammer throw: Green (safest), yellow (cautionary), light red (potential danger), and red (danger). The handbook publishes that there really is no Green Zone for the Hammer Event. The zones can be marked by pennants.

Green (safest)
There really is no green zone in the hammer. Due to the dynamic nature of the event,
and the potential for the hammer wire to break, or the competitor to loose his/her grip,
the entire area around the hammer cage is cautionary at best.

Yellow (cautionary)
The entire area from the doors back through the circle that is outside the protective cage
is considered cautionary. Even though the cage is there, there is no guarantee that the
material of the cage can stop the hammer. In reality, the purpose of the cage is to
dissipate the energy of the implement, slowing it down to the point where it will stop.
We feel that the cautionary area should be expanded if the cage is old, or is constructed
of metal fencing. Mesh cord, preferably 2 layers, is best for retarding the momentum of
the implement.

Light red (potential danger)
Any area within 5 meters of the cage, and the interior of the cage area, are considered
potentially dangerous. If the implement breaks, the head of the hammer can skid under
the netting. The wire could penetrate through a hole in the netting. The hammer head
could burst through the netting. For the competitor in the circle, if the netting is strung
too tightly, the hammer could bounce back at them, creating a potential for serious
injury. Remember that not only the head of the hammer, but the wire and handle are
also potentially dangerous.

Red (danger)
Any part of the potential landing area that is outside or not blocked by the doors,
should be considered the danger area. The hammer head, wire and handle are all
potentially dangerous, and potentially lethal. It is important to remember that the wire,
as it is spinning about the center of mass of the hammer, can cut through bone and flesh
very easily, and should be avoided when in the landing area. On some landing surfaces
(such as artificial ones or very hard ground) the hammer may bounce after hitting the
ground. Officials and spectators should be aware of the potential for the implement to
ricochet if it strikes a hard surface, or if it should strike a rock just below the surface of
the ground.

Questions you should ask/answer where competition areas overlap:

(1) Did you, or did you have any person on your behalf, examine the competition
areas for overlap where competition in one area might affect persons in an
adjacent area?

(2) Would an investigation of the competition areas have revealed that the
competition in one area could affect adjacent areas?

(3) What precautions did you take to avoid injury to persons in adjacent areas?

(4) Could you have adjusted the competition schedule so that persons would not
have been in an adjacent area? If not, why?

(5) Could you have positioned qualified individuals to protect persons moving in
areas adjacent to the competition area?  If not, why?

(6) Who was assigned to protect the adjacent areas?

(7) What qualifications and experience did these people have whose
responsibility it was to protect the adjacent areas?

There are a multitude of safety issues to be inspected before and during the Hammer Throw event. cages need to be inspected for gaps, the landing area must be inspected for rocks that could cause ricochets, and wet grass can cause the hammer to skid. A double layer net cage is preferred with the layer having at least 2 feet of separation with the goal of greater energy dissipation and capture or slowing of the hammer.

Anyone with information related to the case is asked to call Wheaton police Lt. Robert Miller at 630-260-2073. 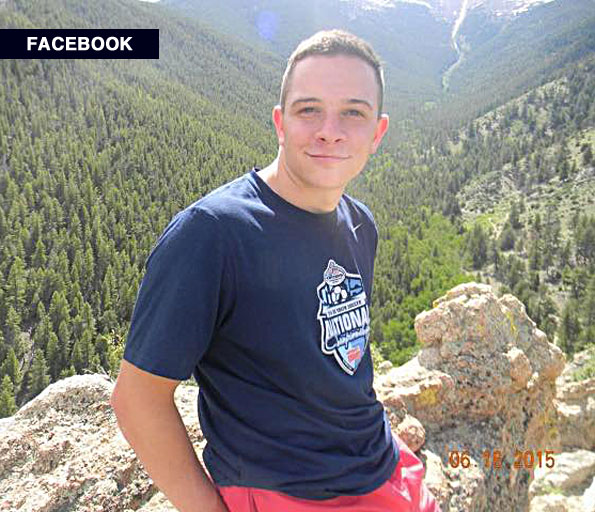