Woodstock firefighter/paramedics responded about 3:16 a.m. Saturday, March 25, 2017 to a call from a resident that thought he saw a fire on a balcony at Willow Brooke Apartments. The correct address was discovered to be 2105 Willow Brook Drive.

Police were first on the scene and reported some smoke showing. Seconds later police reported seeing flames, and then fire through the roof. Police worked quickly to evacuate residents, and helped at least one person off of a balcony before firefighters arrived. A resident was also reported rescued after he called 9-1-1 to ask for help because he was trapped as his apartment filled with smoke.

Woodstock’s fire Battalion Chief requested a MABAS Box Alarm while responding, and upon hearing the perilous report from the police.

Chief 400 on arrival reported two porches well-involved, and assigned Engine 432’s crew to hit the fire with their deck gun.

Fire command at about 4:18 a.m. summarized the fire as involving an apartment building with 12 units. Firefighters were working with multiple hand lines and two ladder trucks, with their main aerials raised, were working to fight active fire still ongoing. 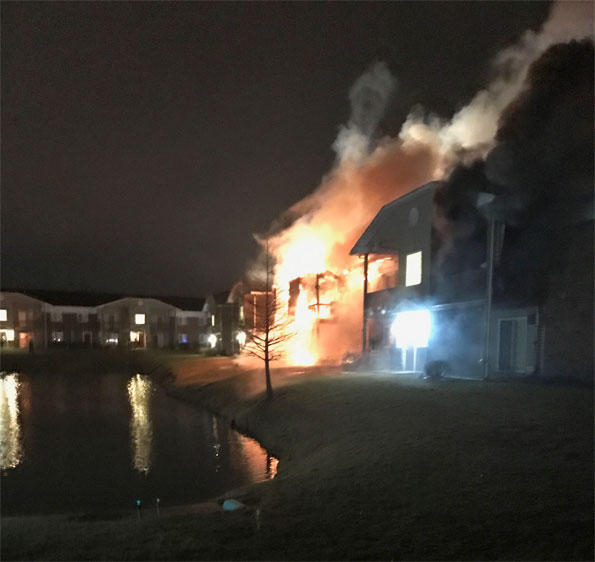 PHOTO CREDIT: Al Berthold. Intense fire showing at the back of the apartment building before firefighters reached the back of the building. Berthold’s family was displaced and used his photo for their GoFundMe Page gofundme.com/build-em-on-up.