Jamal Parks, the suspect in an Evergreen Park murder in a Walgreens parking lot, fatally shot himself during a confrontation with police late Friday about 11:00 p.m. at the Lake Cook Road Metra train station, according to police. The latest news released after autopsy results.

Police, assisted by Deerfield police officers, positioned themselves outside on the platform and inside the train, according to the Illinois State Police Public Integrity Task Force, which is investigating the shooting.

Police planned to arrest 32-year-old Jamal Parks when he got off the train. Illinois State Police say that while the train was stopped at the station, Parks somehow became aware he was being followed by police. Initial reports noted that the suspect was able to see the police outside the passenger train windows.

When police boarded the train, Parks ran to the passenger car’s upper level, according to McCarthy and the Illinois State Police. Some of the officers evacuated passengers, while other officers pursued Parks and actually physically contacted him to take him into custody.

Parks broke free while resisting arrest, pulled a handgun, and fired multiple rounds at officers, McCarthy said. This occurred while the suspect was onboard the train in the upper level. The officers retreated to the lower level and there was an exchange of gunfire between Parks and police officers while some passengers were still on board the train. When police returned fire on the train, Parks was struck at least once.

Initially, a report said a witness saw a female officer shooting at a suspect outside the train, but this may have been a mistaken witness. Paramedics arriving at the scene were told a gunshot victim was on the west side of the railroad tracks. 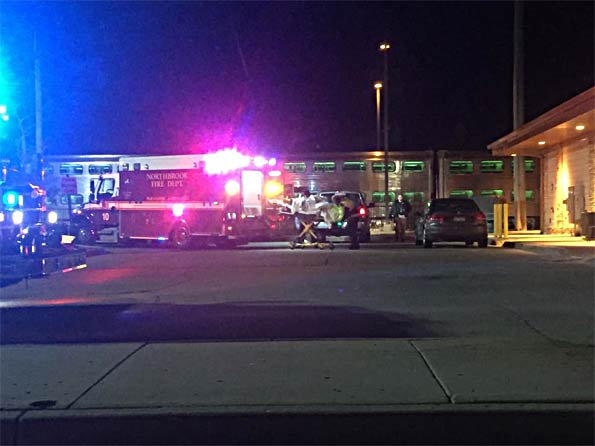 Police say Parks was transported by Northbrook Fire Department firefighter/paramedics to Highland Park Hospital, where he was pronounced dead. Parks’ gun was recovered on the train.

Preliminary results of an autopsy conducted Monday by the Lake County coroner’s office “indicate Parks died from a single, self-inflicted gunshot wound to the head,” the task force statement said. A final determination on cause of death will be made after further forensic testing.

An estimated 40 passengers were onboard the Milwaukee District North Line train during the shootout, according to Metra.

No passengers were injured during the shootout or evacuation, but two police officers were assessed by paramedics at the scene.