Chicago police arrested a man east of Trump Tower after he shoved a Chicago police officer off his bicycle in the vicinity of a street protest to demonstrate against the inauguration of Donald Trump.

Police were keeping people off the street so traffic would not be impeded near State Street and Kinzie Street about 11:00 p.m. Friday January 19, 2017 when Matthew J. Jennings was specifically ordered to stay off the street and move along on the sidewalk.

Jennings, age 22, responded by pushing the police officer off his bicycle, which caused the officer to fall and hit the ground. The fall caused slight bruising to officer’s left leg and damaged the rear derailleur of his bicycle, according to court documents.

Jennings attempted to flee but another police officer nearby placed him under arrest.

Jennings was processed at the 18th District CPD station, where he claimed the police officer ran into him. A criminal history check discovered that Jennings, of the 5500 block of North St. Louis Avenue in Chicago, was wanted on a warrant for an unrelated domestic battery.

Jennings was charged with battery and criminal damage to property for the Kinzie Street incident. Jennings appeared before Judge Maria Kuriakos Ciesil for the misdemeanors, where bail was set at $10,000 at the Leighton Criminal Court Building.

A bandage under Jennings right eye, was from a previous injury that occurred earlier Friday, according to the police report. 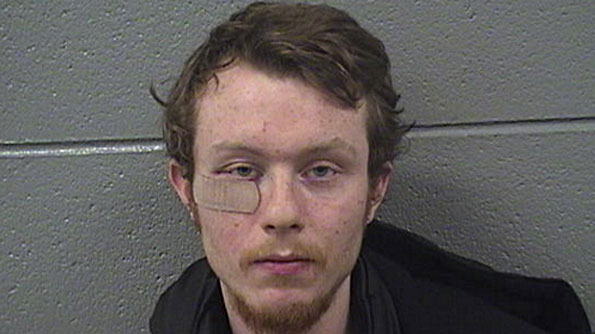