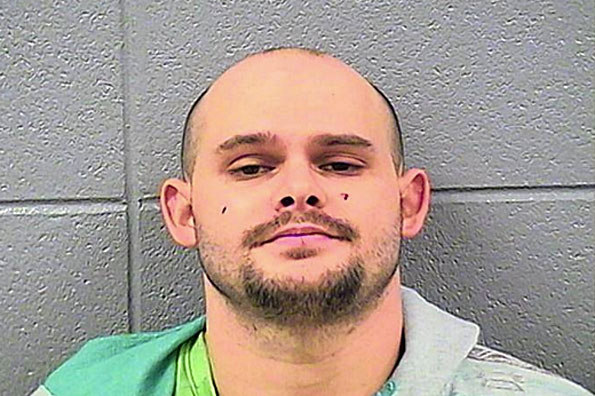 Arlington Heights police responded about 4:00 am. Friday November 25, 2016 to a report of an attack on hospital staff in the Emergency Room at Northwest Community Hospital, 800 West Central Road.

Police received a report that an attacker exited a treatment room, jumped over a counter and began attacking one of the nurses. She attempted to escape him, but he allegedly pinned her against the wall behind a closed door.

The nurse was injured and two other hospital employees were also injured. During the incident, patients and visitors attempted to come to the aid of the hospital employees. There were no reports that any patients or visitors were injured, but one hospital patient in the Emergency Room notified The Cardinal, saying that the “ordeal was horrifying” … and questioned the appropriateness of the response to the attack by hospital staff and security personnel before police arrived.

Arlington Heights police arrested the suspected attacker, and identified him as James Mette, 27, of the 4200 block of Lake Street, Glenview. Mette was a patient at the hospital when the attack occurred. Mette, who is listed as 5’8″ 175 LBS in court records, faces charges of aggravated kidnapping and aggravated battery to a nurse. His bail has been set at $300,000, Cook County court records show.

Mette remained at Cook County jail at 26th and California as of Friday morning, December 2, 2016. His next court appearance is scheduled for December 22, 2016.

Regarding a quick search of possible criminal history of the suspect, the following information was found in The McDonough County Voice. According to The McDonough County Voice newspaper, a man named James A. Mette, 20, of Glenview, was arrested about 10 a.m. Saturday, January 31, 2009 on Lafayette Street in Macomb, Illinois, and charged with driving under the influence of drugs and failure to signal. At the same time as Mette’s arrest, another man was arrested and charged with possession of a controlled substance, possession of a hypodermic needle and possession of drug paraphernalia.

One week after the Friday-morning-after-Thanksgiving attack, Northwest Community Hospital, provided no press release or explanation about the incident, about the risk to patients, or the risk to employees.

Northwest Community Hospital Security is contracted out to ODS Security. Security guards at Northwest Community Hospital were recently laid off and/or rehired by ODS Security. Under the new arrangement, security guards that were formerly allowed to carry Tasers, were stripped of their Tasers. A security guard who spoke on condition of anonymity stated that the lack of permission to carry a Taser and new restrictions on security personnel were demoralizing to personnel. The informant said security guards feared for their own safety and job security if a situation would arise that required them to use force. The informant was also concerned about their ability to contain violent psychiatric patients or patients that were uninhibited while under the influence of dangerous drugs. Asked about the risk of escape of a violent subject to neighborhoods near the hospital, the informant described the risk as a strong concern and very likely possibility.

Job Purpose: Security officers are responsible for the protection, safeguarding, and security of assets, personnel, customers, and all visitors.

The ODS security department plays an essential role in keeping the healthcare system safe and secure. Security officers will provide security services that protect the assets of the system in addition to protecting the lives and personal property of all persons within the system. Officers will primarily conduct interior and exterior foot patrols; respond to emergency situations and alarms; as well as providing excellent customer service to all.

Must adhere to all site specific post order requirements.

Responds to alarms, emergency codes, and security related incidents; decides what actions to take based on situation, facts known and position limitations.

Provide assistance to patients arriving to the Emergency Department under the direct supervision of clinical staff, unless explicitly advised otherwise.

Investigates and reports on accidents, incidents, suspicious activities, safety and fire hazards and other security related situations to supervisor for correction or follow-up actions; maintains contact with ODS supervisory team.

Provide needed assistance to customers, employees, visitors and/or the client that are in line with the department’s procedures.

Frequent interaction with mental and emotional stress related to working with persons who are ill, disabled, elderly and/or emotionally upset.

Transport deceased bodies to the morgue and release bodies from the morgue to funeral homes.