A dead goat was left at the Jewel-Osco parking lot in November 2016. The goat appeared to be skinned with its head severed at the neck. Photos of the dead goat were submitted by a witness who wants to remain private.

The witness is a customer at Jewel-Osco who arrived at the store about 8:00 p.m. on Friday, November 25, 2016 — the day after Thanksgiving. The witness said he saw an object, but didn’t pay much attention to the object because he thought it was a pile of trash. When he left the store with his groceries that he just purchased, he noticed that a Jewel-Osco employee that retrieves the shopping carts was taking photos or video of the object. The witness drove his car over and discovered for himself the dead goat in the parking lot. He took his own photos with his back to the Jewel-Osco building — facing south toward Rand Road. When the witness read yesterday’s Cardinal article asking for help confirming the finding of a dead goat in the Jewel-Osco parking lot, the witness sent a message with copies of the photos to Facebook.com/ArlingtonHeightsCrime as requested in yesterday’s article.

In the photos submitted, the goat appeared to have an ear tag that is possibly used for records, registration, proof of ownership, etc. Goat tags may also be used to record various meat standards for the US Department of Agriculture (USDA) either currently or for future standards. Ear tags are often used on meat goats. Staff at the butcher counter and deli counter at Jewel-Osco said they don’t sell any goat products at the store.

The Cardinal went out to investigate the parking lot compared to the photos, Sunday morning before snowfall started, to validate the pictures by matching identifying pavement markings and asphalt cracks that were visible in the goat photos. A match was discovered in the aisle aligned with the west Jewel-Osco entrance door, and south of the outermost shopping cart corral in that aisle.

The photos below compare the markings in the parking lot. The goat’s body is hidden by the black lines. The actual photo is shown at PublicSafetyReporter.com … Additional photos … 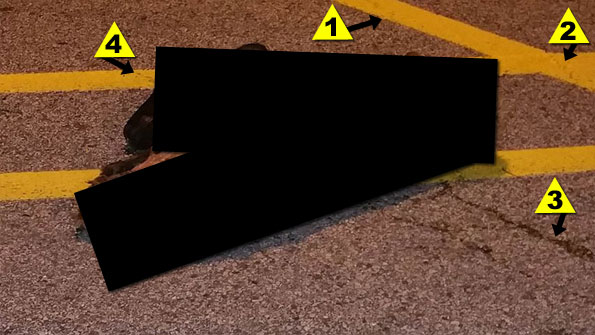 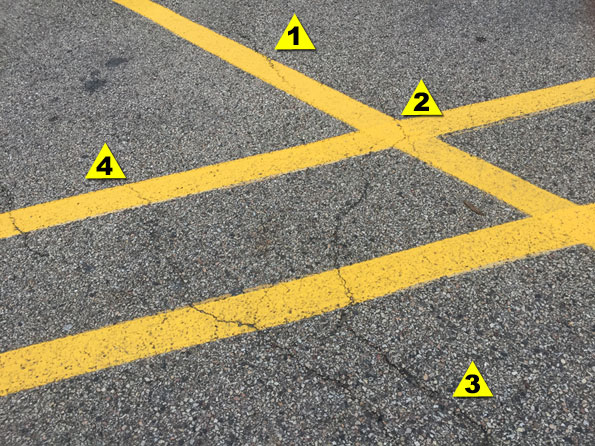 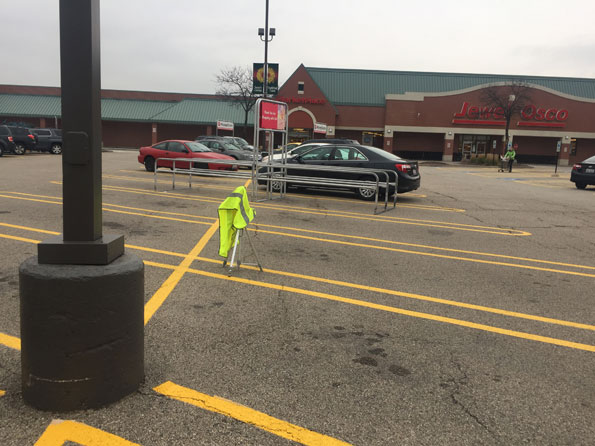 Tripod with reflective vest shows where goat’s body was discovered for orientation in the parking lot.

The exact time the goat was first discovered has not yet been determined, and attempts to match a police report to this case have failed at the time of publishing this report.

Yesterday The Cardinal reported that just before Thanksgiving, witnesses reported seeing a dead goat in the parking lot at Jewel-Osco, 440 East Rand Road in Arlington Heights.

The Cardinal received a tip that a goat was found with the animal’s throat slit in the parking lot near the aisle by the exit of the store and about half way to Rand Road from the exit door. The date of the discovery was reported to have been the Saturday before Thanksgiving, November 19, 2016 about 8:00 p.m. According to the witness, a customer discovered the goat, and reported the finding to a store manager. The witness reported believing the police were called, but the Arlington Heights Police Department could not immediately confirm awareness of the report.

A second witness, who saw a video of the dead goat, recalled that the goat was discovered on Wednesday, November 23, 2016 — the day before Thanksgiving. The second witness was not aware that the throat was slit, but reported the goat was flattened like road kill.

A store manager contacted at Jewel-Osco at 440 East Rand Road denied having any awareness of a dead goat at the premise in the past 15 days.

If anyone can confirm any additional information related to these reports, or has a picture or video, please send Facebook.com/ArlingtonHeightsCrime using the MESSAGE button.

If anyone in the area is missing a goat or has reported a missing goat, please send Facebook.com/ArlingtonHeightsCrime using the MESSAGE button.