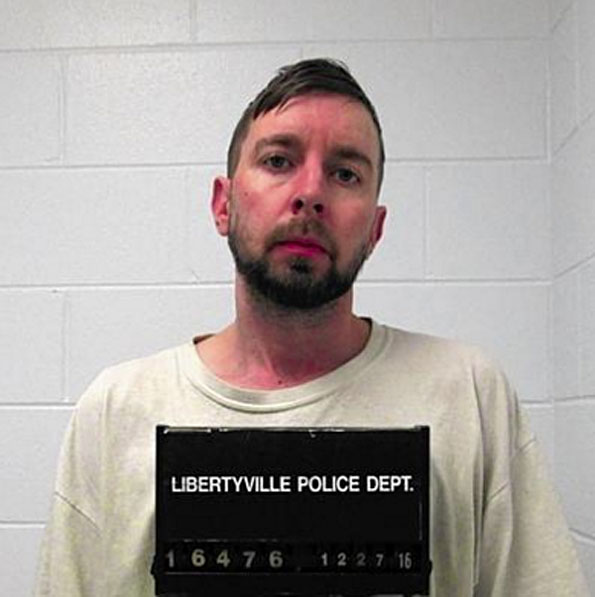 Bond was set at $3 million Wednesday for Kenneth S. Seplak accused of shooting and killing David Gorski, who had just been on a date with a woman authorities believe the killer was stalking. The killing took place on Friday December 23, 2016, just before 11:26 p.m. on Milwaukee Avenue just south of the Acura dealership in Libertyville.

Kenneth S. Seplak, 37, of the 1400 block of North Lake Shore Drive, Round Lake Beach, was charged with first-degree murder/intent to kill/injure on Tuesday, December 27, 2016 in connection with the shooting death of David Gorski. According to the Lake County coroner’s office, Gorski, age 30, was killed by a single shot with a bullet trajectory through his right arm and into his chest.

At 11:26 p.m. Friday, a passerby called 9-1-1 and reported a man slumped over the wheel in a dark-colored Volkswagen Jetta. Libertyville police and paramedics responded and found Gorski without a pulse in his car on the center median of Milwaukee Avenue near Hollister Drive.

The events that prosecutors say led up to the fatal shooting were detailed during Seplak’s bond hearing Wednesday morning while a group of about 10 spectators in the courtroom gallery watched. Seplak walked briskly back to the detention area while glancing toward the group. A woman from the group later screamed, “Why did he have to look at us?”

Investigators learned Gorski’s plans for Friday night included seeing a movie at Hawthorn Mall in Vernon Hills with a 30-year-old woman from Wauconda. The Wauconda woman later told police that she had a history of problems with a stalker, whom Covelli identified as Seplak. Covelli said officers learned of at least one other recent incident when Seplak made an unwanted appearance at the woman’s home.

Officers responded Saturday to Seplak’s house and found him with his phone. GPS data taken from his phone showed he had traveled to the AMC Hawthorn 12 theater at Hawthorn Mall in Vernon Hills, and then to a house in the 41000 block of North Route 83 in an unincorporated area near Antioch.

A man at the house gave police a bag that contained a handgun and ammunition. He told police he found the bag in his car about the same time Seplak visited him, according to Covelli.

Ballistic evidence matched the bullet taken from Gorski to the gun found at the house, according to Covelli. Gunpowder residue was also found on Seplak.

Covelli would not report how many shots were fired or from where.

Police are taking extra precautions to protect the woman, but Covelli said the incident was not gang-related and officers at this point do not believe anyone else was involved in the murder.

A defense attorney, said Seplak worked for a beverage distribution company for about 10 years until recently being laid off. He said Seplak has an upstanding character.

“He’s a very steady guy who never missed work,” Hodgkinson said. “He lives with his parents to help take care of them. His father has some medical issues.”

While determining the $3 million bond, Judge Strickland said Seplak has not previously been arrested.