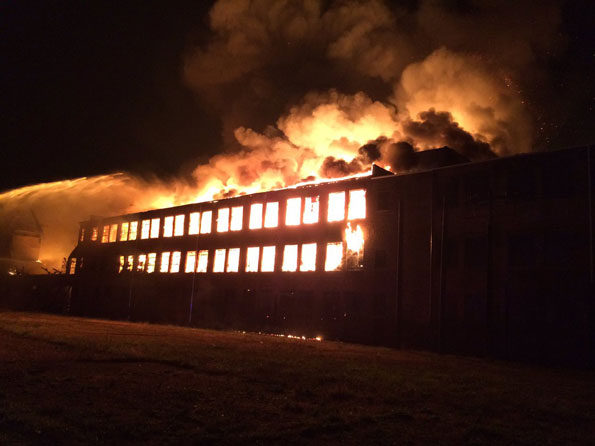 A vacant building fire went to a 5-11 Alarm and stunk up a good part of west side neighborhoods and Chicago Loops overnight.

Chicago firefighters responded about 2:00 a.m. Saturday to an extra alarm fire at a vacant commercial building on Kostner Avenue near 26th Street. No injuries were reported. Firefighters fought the fire defensively most of the night — meaning they fought the fire from the outside because conditions were too dangerous inside.

At the peak of water push on the fire, firefighters had nine master streams flowing water on the fire with five of those streams elevated by Tower Ladder trucks and Snorkel units.

Chicago Fire Department’s Battalion Chief 14 reported a 3-story ordinary, 100×200, with a fire in the rear at the outset of firefighting operations.

The fire department was immediately upgraded to a Still and Box by about 2:04 a.m.

The fire was not struck out as of 5:30 a.m. People downwind near the scene, just east of Cicero, reported smoke overnight, and are waking up to the smell of smoke about dawn. Smoke calls prompted a few smoke investigations by firefighters from other parts of the City of Chicago.

The location of the fire was in the Little Village neighborhood just south of Ogden Avenue, and winds were from the southwest about 3-7 MPH carrying smoke to the northeast. Neighborhoods in the path of smoke were North Lawndale, the Illinois Medical District, Homan Square, East Garfield Park, University Village, Little Italy, Near West Side, West Town and Chicago’s Loop.

LIVE TRAFFIC MAP of neighborhood to a report of crash with injuries at near 2559 S Kostner Ave Chicago, Il …