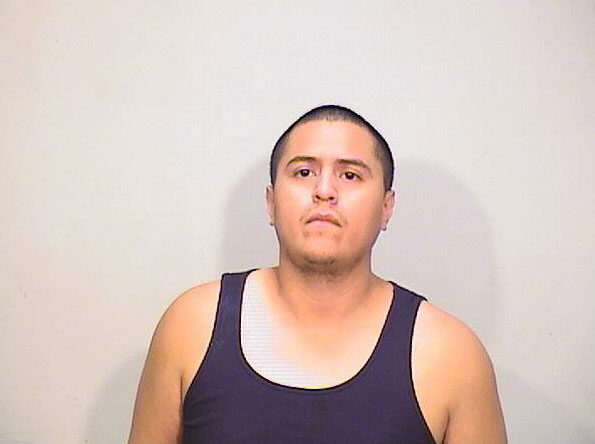 Mota unsuccessfully attempted to enter a side door and later tried to get through a window leading into the house’s basement area where a male resident was sleeping nearby. The Long Grove resident woke up, saw Mota, then retrieved a pistol from a location inside the home, and fired the handgun four times at Mota. None of the shots hit the suspect, but one shot appears to have grazed Mota’s pant leg and another shot hit the suspect’s vehicle, as the suspect was running to his vehicle, which was parked near the victim’s home. Police say they believe Mota drove over a decorative rock in a neighborhood yard while trying to escape.

After Lake County Sheriff deputies arrived, they alerted area police departments about the incident. A short time later, a Vernon Hills Police Officer responded to a suspicious vehicle call in the 800 block of Westmoreland Drive, Vernon Hills, which happened to be near the suspect’s residence. The Vernon Hills police officer found Mota, who was changing a flat tire, and noted that he matched a description of the suspect in the Long Grove incident. Mota was subsequently arrested and transported to the Lake County Sheriff’s Office Criminal Investigations Division.

Following a thorough investigation by sheriff’s deputies and detectives, it was determined Mota burglarized two vehicles in the Long Grove homeowner’s driveway, before attempting to make entry inside the residence.
Mota was subsequently charged with attempt residential burglary (class 2 felony) and two counts of burglary to motor vehicle (class 2 felonies). Mota is being held in the Lake County Jail on $5,000.00 bail. He is due in court on November 16, 2016 at 1:30PM in courtroom C-120.

Sheriff Curran reminds the public that the defendant is presumed innocent until proven guilty in a court of law.