Arlington Ale House was approved Tuesday night at a Village Board Meeting without a “Plan B” option to have a large outdoor rooftop patio. The new business will be located on the third floor (Unit 301) of Metropolis Performing Arts Centre, 111 West Campbell Street. The 10,000 square foot space has been vacant for about ten years. The building is a 4-story building, surrounded by an 8-story condo to the west and a 2-story space to the east with a rooftop balcony, containing Metropolis Ballroom and the soon-to-be renovated Armand’s. An expanded patio for Arlington Ale House would require additional emergency egress capability. Had the “Plan B” been initially approved, there would be no live entertainment permitted on the patio because of noise issues involving sound transfer to neighboring condos. The deferred large rooftop patio is proposed for the south side of the building just north of the parking garage at 22 South Vail Avenue.

The Plan Commission voted 9-0 to recommend approval of the Arlington Ale House space 3 days prior to Tuesday’s meeting.

“We are facing competition from Rosemont and Randhurst Mall that have entertainment venues. We have one right here in our downtown and we have a private businessman here who is willing to invest funds in our community.”

Arlington Ale House owner and manager Kevin McCaskey – the grandson of the former Chicago Bears principal owner Virginia Halas McCaskey and great grandson of legendary George Halas – is planning “a family atmosphere” venue aimed primarily at patrons in their 30s and up. Initially, the venue was described as a restaurant that would offer entertainment options for visitors, including old timey board games, a shuffleboard, ping pong and pool tables and an outdoor patio area. The business would not have its own kitchen, but patrons could order food delivered from many local restaurants in town. Online computer ordering from stations at Arlington Ale House were discussed. 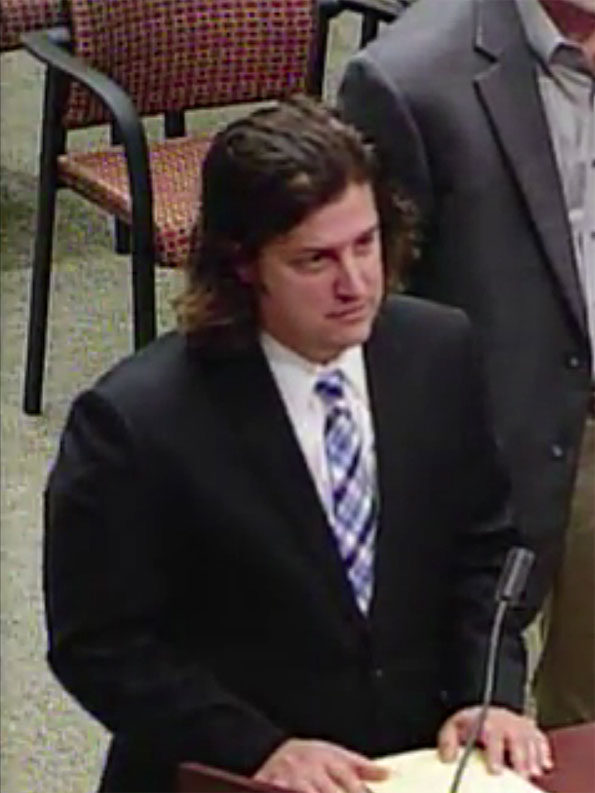 Kevin McCaskey speaking before the Village Board.

The venue would also be available for corporate events, and would feature a 125-seat auditorium with a catering service, according to Kevin McCaskey. Use for the auditorium and space could include an open mic night for comedians, music recitals, bingo, corporate training, online computer competitions, and community meetings.

The new business is an entertainment venue that will not serve food. Instead, patrons will be able to order takeout from nearby restaurants, play pool, bags or arcade games, watch sports on TV and eventually, possibly enjoy an outdoor patio. The business will still be required to get a liquor license. Arlington Heights recently has not allowed bars serving liquor to operate without a kitchen.

Village Manager Randall Recklaus explained that back in July 2016 the Village Board took steps to make an amendment to the liquor code to allow the sale of alcohol in spaces on the upper levels of downtown buildings that do not have kitchens … if they can provide food via other means. This example is part of a broader fine tuning to optimize the liquor code for the community.

The current liquor code requires that any business that derives the majority of its sales from alcohol cannot permit anyone under 21 at any time. The existing regulation would prevent teen night events, which surprised McCaskey as he stood before the board. The law specifically says that when liquor is the primary revenue, people under 21-year-old could not be admitted to the establishment. McCaskey said that provision was a concern. However, the board and village management and legal personnel appeared to suggest that the village would be flexible in finding a way to come to a workable solution which would permit underage entry into the establishment.

Trustee Jim Tinaglia was concerned with capacity, and how the management would handle events that draw beyond capacity. The owners and the board were reminded by Village Manager Randall Recklaus that the power of liquor law revocation could enforce capacity violations. The board also recommended that the fire department could employ a fire guard to help the ale house manage capacity enforcement.

“No one in their right mind would build this (existing space) exactly the way it sits right now. The money that it would take to do it right would be insurmountable … This is a little bit of an experiment. It’s a gamble on all of our parts … to help make this happen.”

Trustee Robin LaBedz asked if people could bring their own food to the venue. Kevin McCaskey replied “Yes” that patrons would be permitted to bring their own pizza, for example.

Trustee John Scaletta was concerned with noise that might affect neighboring condo residents. Scaletta also inquired whether the theatre might be affected by noise from Arlington Ale House above. The floor of Arlington Ale House is directly above the ceiling of the Metropolis Performing Arts Centre theatre below. Charles Witherington-Perkins, ‎Director of Planning and Community Development, replied that the former occupant of the space, LaBatt Beer Academy, did not have noise issues with the theatre below.

Outside, noise issues have long been a concern for nearby condo owners, and Metropolis Executive Director Joe Keefe, who offered enthusiastic support of the Arlington Ale House proposal, reminded the Village Board that noise issues exist regardless of the ale house plans.

Trustee Carol J. Blackwood inquired about a marketing plan, and said she is a little concerned about how well the business would endure past “the newness” and initial opening. Trustee Joseph Farwell had similar concerns with the full marketing plan.

Trustee Michael Sidor, who was the only village board member that didn’t vote “Yes” for approval of the Arlington Ale House, expressed concern about mixing interior pedestrian traffic of Metropolis students with ale house patrons.

Trustee Michael Sidor was concerned with the safety of beer truck loading operations, and also the interior building mix of underage students in classes and patrons consuming various libations. Many of the Metropolis Arts classes are held during the evening, when the ale house could be busy, so future issues may have to be addressed. Trustee Sidor was also concerned with some of the uncertainty involved with the business. He asked about agreements with neighboring restaurants for carryout or delivery into Arlington Ale House, and learned from McCaskey that Letters of Intent have been established with Mago’s and Armand’s, and verbal agreements have been established with Cortland’s Garage and Peggy Kinnane’s.

“I’ve heard enough tonight that I’m at a comfort level to vote in favor. “That’s not to say we’re not going to face issues as we go forward, but I think we can overcome those issues. We all want to see this become a successful endeavor.”

McCaskey’s long-term plan, to expand the patio (Option B) would require village board for approval — likely in Spring 2017. The additional egress plan would require more fire exit options — possibly a pedestrian bridge to the neighboring parking deck.

MOTION: To concur with the staff’s recommendation, the Plan Commission’s recommendations modified by the staff recommendation with the additional condition that if the petitioner desires to move forward with Plan Option B that the proposal must be presented to the Village Board for its consideration and approval.

The LaBatt Beer Academy was a training facility for retailers, wholesalers and internal staff. Three themed bars, including a Mexican Cantina, a Euro Pub and a North American Sports Bar along with a roof terrace and a 124-seat auditorium provided hands-on training in authentic surroundings.