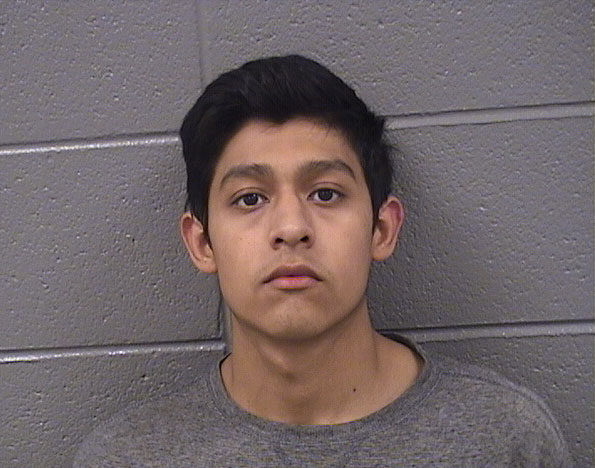 Mount Prospect Police Department responded approximately 2:45 PM Monday, September 5, 2016 to a report of a robbery at a house in the 300 block of North Main Street (Route 83) near Isabella Street and about halfway between US 14 and US 12. While enroute, officers learned the offender(s) had fled, southbound on Main Street in a black Lincoln sedan. Upon arrival at the scene, police say they located a female and male victim who stated Javier Noveron — the female’s ex-boyfriend — had unlawfully entered the house and confronted them in the basement.

Police say Noveron allegedly took the female’s phone as she attempted to call 9-1-1. The victims went upstairs to the kitchen to get away from Noveron, but he followed them, grabbed a knife in the kitchen and threatened the male victim with it. The male victim was able to escape the residence without any injury. Noveron followed the female victim back downstairs, where he grabbed the female around the neck with his hands and began strangling her, releasing her after several seconds. Noveron exited the residence and got into a black Lincoln sedan, fleeing southbound on Main Street (Route 83) toward Northwest Highway. The female suffered minor injuries as a result of the attack. The female victim was assessed by Mount Prospect Fire Department firefighter/paramedics at the scene.

Meanwhile, Mount Prospect police officers observed the black Lincoln sedan in the area of Main Street (Route 83) and Northwest Highway (Route 14) where a high risk traffic stop was conducted with police officers surrounding the Lincoln. Officers took five occupants of the Lincoln into custody without incident and transported them to the police station. Upon further investigation, it was determined four of the occupants of the Lincoln were not involved in any criminal activity at the house and were released without being charged. The fifth occupant, Javier Noveron, was charged after all of the parties involved were interviewed by a representative from the Cook County State’s Attorney’s Office.

On Tuesday, September 6, 2016, the Mount Prospect Police Department charged Javier Noveron, 19 years old, of 2 Whipple Tree Road, Wheeling, with two counts of Home Invasion, one count of Aggravated Domestic Battery, and one count of Robbery from an incident on Monday, September 5.