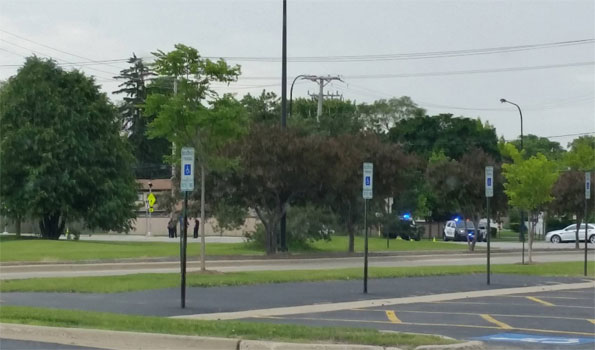 The preliminary investigation by Mount Prospect Police Department revealed a female bicyclist, Joni Beaudry, 55-years-old of Mount Prospect, was attempting to cross northbound across Central Road at the designated crosswalk. Beaudry had activated the crossing signal and began to cross after the vehicles in the eastbound curb lane of Central Road stopped. A black Lexus SUV driving in the eastbound median lane of Central Road did not stop and struck Beaudry. The driver of the Lexus, Hanna Burzynska, age 56, of Elk Grove Village remained on scene after striking the bicyclist.

Joni Beaudry was transported to Level I Trauma Center Advocate Lutheran General Hospital where she was pronounced dead.

Hanna Burzynska was charged with failure to yield to a pedestrian in a crosswalk and failure to reduce speed to avoid an accident.
Burzynska was the only occupant in the SUV at the time of the crash, according to Mount Prospect Police Department.

The Mount Prospect Police Department, along with the Major Case Assistance Team’s Serious Traffic Accident Reconstruction Team, is investigating the crash and requests anyone who witnessed the crash or has any additional information to contact the department’s Major Accident Investigation Team at 847-870-5656.

Mount Prospect received $92,400 for The Safe Routes to School Program (SRTS), which is a federally funded program that looks to promote and improve walking/biking to and from school. Melas Park, is on the north side of Central Road, and the neighborhood includes Westbrook School, St. Raymond School, and Lincoln Junior High School nearby.

LIVE TRAFFIC MAP of neighborhood to a report of crash with injuries at Central Road and Weller Lane Mount Prospect, IL …