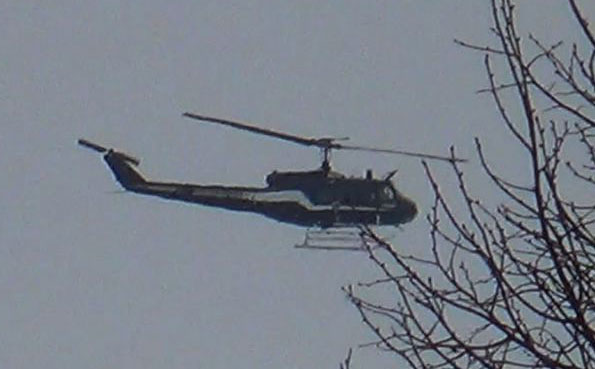 The helicopters are believed to part of the AIR-ONE Emergency Response Coalition.

One Bell UH-1V “Huey” is believed to have been the noisy “chop chop” helicopter, which was seen going westbound and eastbound Monday January 11, 2016.

Two Bell OH-58C “Kiowa” helicopters were seen flying westbound with the “Huey” about 10:45 a.m. During both flight patterns they seen flying east or west in the area of Thomas Street and Palatine Road in Arlington Heights.

The sightings were not officially confirmed and were observed from a distance.

At this time there are no known missions in the area.

An AIR-ONE Bell OH-58C “Kiowa” was on display at Rolling Meadows Police Department’s National Night Out last August on August 4, 2015. N79PD is believed to be owned by the Winthrop Harbor Police Department in Lake County (According to the FAA Registry).

An AIR-ONE Bell OH-58C “Kiowa” was on display at Rolling Meadows Police Department’s National Night Out last August on August 4, 2015.