Shrine of Our Lady of Guadalupe Des Plaines on Saturday December 12, 2015 at dawn.

On Friday night — on the eve of Saturday December 12 — parishioners arrived to the Shrine of Our Lady of Guadalupe to place bouquets of roses and candles in front of the shrine at the outdoor grotto on the Maryville Academy property, just northwest of River Road and Central Road in Des Plaines.

The outdoor grotto includes the statue of Our Lady of Guadalupe and a statue of a kneeling Juan Diego. Mexican peasant Catholics believe Juan Diego spoke to Mary on December 12, 1531, on a hill outside Mexico City. That’s where they say she told him to build a church in her honor. The Day of the Virgin of Guadalupe is a popular Catholic feast that celebrates the belief that a man encountered the Virgin Mary, Mexico’s patron saint, in Mexico City on December 9 and 12, 1531.

Large crowds gathered Friday at 8:00 p.m. in Des Plaines for the annual lighting of the Antorcha Guadalupana, or Guadalupe Torch, which followed the Opening Solemn Mass at 6:00 p.m. Members of Catholic parishes throughout the archdiocese lit torches to run back to their churches, where they attend a feast day Mass early Saturday morning.

Some torch bearers arrived on foot from as far as the north side of Chicago, St. Agnes of Bohemia in Chicago’s Little Village neighborhood and St. Donatus in South suburban Blue Island.

In the suburbs, groups of pilgrims from St. Colette in Rolling Meadows, from St. Cecilia in Mount Prospect, St. Joseph the Worker in Wheeling and Misión San Juan Diego in Arlington Heights were also scheduled to arrive to the shrine on foot Friday night. The group from Misión San Juan Diego, during their trek on foot, crossed the intersection at Arlington Heights Road and Palatine about 8:20 p.m. Like others, they were on their way to the Shrine of Our Lady of Guadalupe in time for the singing of “mananitas,” the traditional serenade to Our Lady of Guadalupe at midnight. A total of 15 pilgrimages were planned to arrive either on foot, on bicycles or by buses.

River Road and Central Road were congested with traffic Friday night with mild weather for December on both Friday and Saturday. Large portable floodlights were positioned in proximity to the grounds of the Shrine of Our Lady of Guadalupe for safety. At dawn on Saturday, bands continued to serenade.

Masses were scheduled about every two hours in both the outdoor grotto and gymnasium. The festival concluded with a 7 p.m. Mass Saturday — a Solemn Closing Mass, known as the Mass of the Roses and Apparitions. A large outdoor television array displayed the Mass outside near the outdoor grotto.

The apparition of Our Lady of Guadalupe is known as a Marian Apparition or supernatural appearance by the Blessed Virgin Mary.

According to the doctrine of the Roman Catholic Church, the era of public revelation (Word of God and the Word of God Incarnate/Jesus Christ) ended with the death of the last living Apostle, Saint John the Apostle about 100 A.D. Subsequent revelations are usually known as personal revelations or private revelations.

Tamborazo El Paraiso at Shrine of Our Lady of Guadalupe on December 12, 2015

VIDEO/PHOTOS from Shrine of Our Lady of Guadalupe in Des Plaines, Illinois (December 12, 2015) www.arlingtoncardinal.com/?p=76646 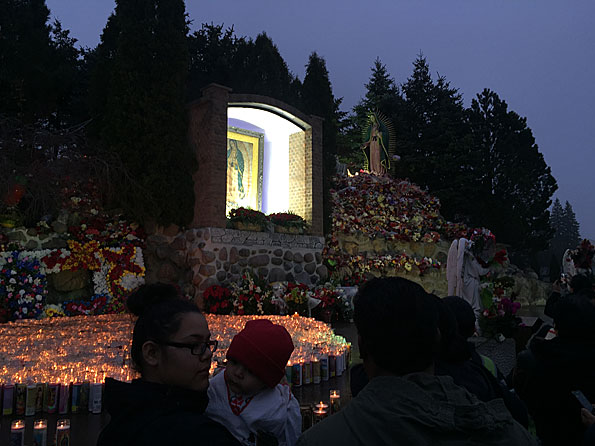