Officials say Lieutenant Joe Gliniewicz was not ambushed and killed by three suspects but carefully staged his own suicide to look like a murder. CNN’s Pamela Brown reports.

The death of Lt Joe Gliniewicz was ruled a suicide. Lake County Major Crime Task Force Commander George Filenko explained in a press conference Wednesday that the investigation discovered that Lt. Joe Gliniewicz had embezzled funds, and was stealing and laundering money from the Fox Lake Police Explorer Post for seven years.

Thousands of dollars were used for mortgage payments, gym memberships, adult websites, and unaccounted cash withdrawals, and other payments. The total amount is believed to be a five-figure amount.

“Gliniewicz committed the ultimate betrayal to the citizens he served and the entire law enforcement community.”

Deleted text messages were retrieved and contained incriminating evidence regarding the embezzlement investigation.

Lt. Joe Gliniewicz left a trail of his personal equipment to stage a mock crime scene to stage his death. Items were laid out to stage signs that there was a struggle at the scene.

There were no physical signs that he fought for his life, or that his body was dragged. There were no injuries to his hands. His uniform was not disheveled.

The first shot hit his bulletproof vest and his cell phone. The second shot was the fatal shot. His gun was found 2 1/2 feet above his head.

Gunshot residue was found underneath his bulletproof vest carrier.

The second shot went under the vest and under his collar bone. The bullet hit a pulmonary artery, went through his lung and lodged in his 10th rib.

He was also discovered with a shored exit wound — the bullet did not exit his body because of the bulletproof vest, but there was a jagged wound on his back side. 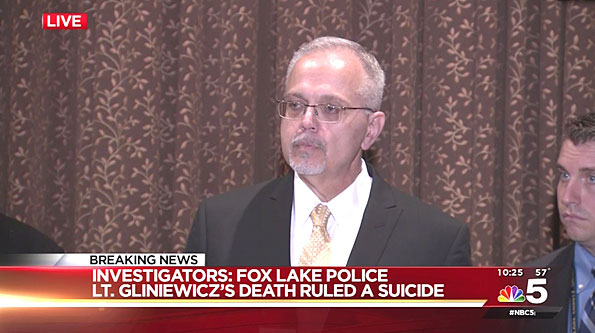