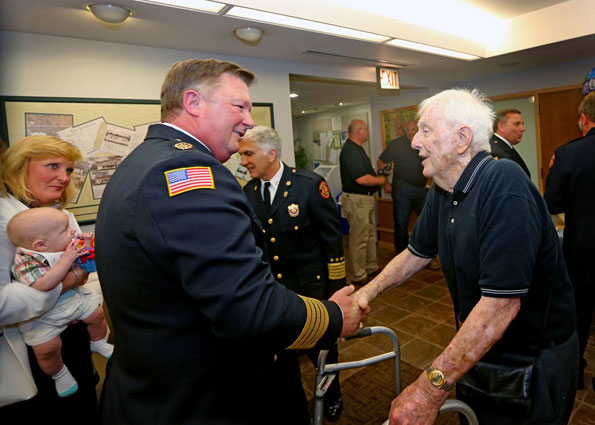 Chief Baker has been with the Village of Buffalo Grove since 2013 as Deputy Fire Chief. He has over 36 years of fire department experience including 30 years as a Paramedic, eight years as an Assistant Chief with the Elgin Fire Department and 14 years as a live fire instructor with the Elgin Regional Fire Academy. Baker was awarded Firefighter of The Year in 1989 and has received the Chief VandeVoorde award for EMS Excellence. He is also a 23-year senior adjunct faculty member at Elgin Community College. Baker graduated with academic honors from Northern Illinois University with a Masters of Public Administration and has received the Chief Fire Officer (CFO) designation by the Center for Public Safety Excellence and Executive Fire Officer (EFO) from the National Fire Academy in Emmitsburg, MD.

“Chief Baker has proven to be an exemplary leader over the past several months as Interim Fire Chief,” said Village Manager Dane Bragg. “He has shown a strong commitment to the mission and values of the Village and led the Department admirably during the transition. His focus on high quality fire and EMS services is excellent.” Chief Baker assumed his role as Fire Chief after being sworn in to his new post during the Village Board meeting on July 6, 2015.

A reception was held to welcome Chief Baker and recently-appointed Trustee Joanne Johnson on July 6, 2015 at 7:00 pm at Village Hall, 50 Raupp Boulevard, immediately preceding the regularly scheduled Village Board meeting.