Tonight on the Village Board meeting agenda is the topic of a proposed Property Tax Levy. The village portion of the property tax bill increase would be $19 for the average taxpayer if a 1.84 percent increase, approved at a committee-of-the-whole meeting, is given final approval at a regular village board meeting. The tax levy increase could be approved tonight.

Trustee Glasgow moved, seconded by Trustee Rosenberg that the Committee-of-the-Whole recommend to the Village Board to authorize staff to prepare the Village’s and the Arlington Heights Memorial Library’s 2013 Tax Levy Ordinance reflecting an estimated total tax levy of $44,575,400 or a 1.84% increase over the 2012 Tax Levy for the Village and Library portion of the levy. The motion passed with Trustees voting as follows:

Initially, the board was set to approve a 2.06 percent increase in the levy, which would involve the average taxpayer paying $22 more. Trustees discussed the increase with Trustee James Tinaglia questioning and advocating no increase in the tax levy.

To drop the increase to 1.84 percent, the village instead would take $100,000 from contingency funds.

“I think we would all like to keep the levy at 0 percent (increase), … I would prefer to maybe take little baby steps” as opposed to having to demand a larger increase in the future.

Trustee John Scaletta reminded the board that even though the village may be in a better position, many residetns are still struggling.

Trustee Mike Sidor challenged Village Manager Bill Dixon and his staff to find $100,000 in savings, rather than dipping into the contingency fund. “I would hope that we can find $100,000 somewhere in this village building. I believe we can do it,” Sidor urged.

In an editorial, The Cardinal proposed that the decision to purchase a Road Weather Information System (RWIS) for Arlington Heights is unnecessary and not as effective as a combination of existing, free resources. There are many ways to tell if the pavement is wet, dry or icy in Arlington Heights preferable over the installation of two weather towers or equipment in an urban setting. One of those is regular police patrols, which include road reports — already practiced by police officers.

RWIS is a great resource for countywide or statewide applications in locations where observers are not frequently traveling (an infrequently traveled mountain pass, a rural bridge, etc.). For additional examples, a rural road in Illinois or Iowa where a Sheriff or State Trooper might not pass for hours at a time, is a good place to deploy RWIS.

The two RWIS devices are located at Windsor Drive and Valley Lane, and at Wilke Road and White Oak Street.

The Village of Arlington Heights also approved an encryption option on public safety radios for police officers and firefighters. The option cost an additional $380 per radio. A low estimate of 250 radios at $380 per radio costs $95,000. The encryption is a military-grade security option that many experts believed should not be deployed department-wide. The experts believe encryption if more effectively and securely utilized when it is limited to SWAT tactical teams or drug investigation or sting operations.

In response to Tinaglia’s question to eliminate an increase in the tax levy, Finance Director Thomas Kuehne said it would be difficult to close the gap. Kuehne mentioned finding a different revenue source to close the gap on the revenue side, or focus on the expense side to close the gap by decreasing staff levels. 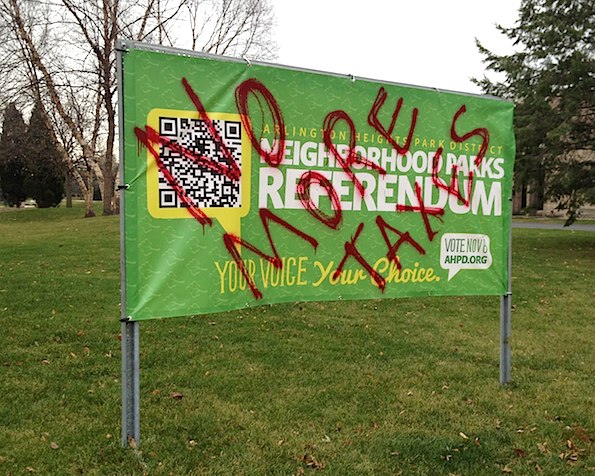