Brad Paisley and Carrie Underwood lampooned Miley Cyrus, Twerking, and Obamacare. Toward the end of the intro monologue, Paisley says he twerked his back, but Underwood tells him that’s not what twerking is. Anyway, they go to sign up Paisley to get health care from Obamacare, but they have problems in the skit, just like the real problematic Obamacare rollout. With a rendition of George Strait’s Amarillo by Morning, they sing that by the time they get signed up they’ll have cataracts, hemorrhoids, and dementia with the six people served.

There was a huge applause, but Taylor Swift looked confused. Maybe, they don’t act like this in Hollywood? 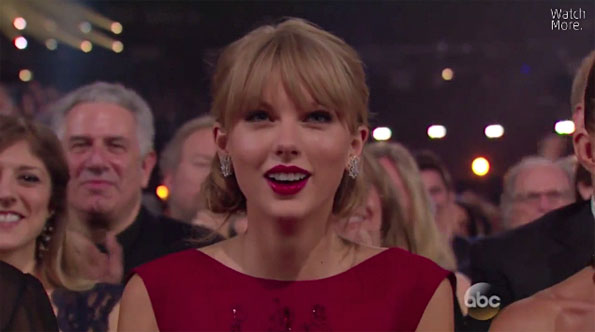 Taylor Swift looking like any of the young Americans who already signed up an overpaid for Obamacare and will be ripped off by US debt and inflation (Of course it really won’t matter to her).

The Country Music Awards were held last night on ABC.