Week 4 of Under The C on Fox Kickoff Sunday on Fox 32 Chicago 10-6-13 with Pete McMurray and George Parsons of the Shedd Aquarium. The sting rays at the Shedd Aquarium pick the winner of today’s Saints-Bears game.

The NFL FOX Sunday Game between the Chicago Bears and the Louisiana Saints will be televised on FOX at 1 p.m. ET/12 noon CT. New Orleans (4-0) at Chicago (3-1). New Orleans Quarterback Drew Brees aims for a record 10th-straight 300-yard game as the Saints try to snap a three-game Soldier Field losing streak.

WFLD became the unofficial “home” station of the Chicago Bears in 1995, when Fox acquired the television rights to the National Football Conference of the NFL, of which the Bears are a member. WFLD is now the official station of the Bears, airing preseason telecasts in addition to most regular season tilts, as well as Bears Gameday Live and Gamenight Live, which follows The Final Word on Sunday evenings during the season.

Bears Gamenight LIVE
Bears Gamenight Live airs on Sunday nights following “The Final Word” on FOX Chicago. Bears Gamenight Live is a full half hour of game coverage featuring an exclusive interview with Bears Head Coach Lovie Smith. The Sounds of the Game segment features a “mic’d up” player for each game, and Tom Thayer and Jeff Joniak analyze the game in-studio while hosted by Lou Canellis. 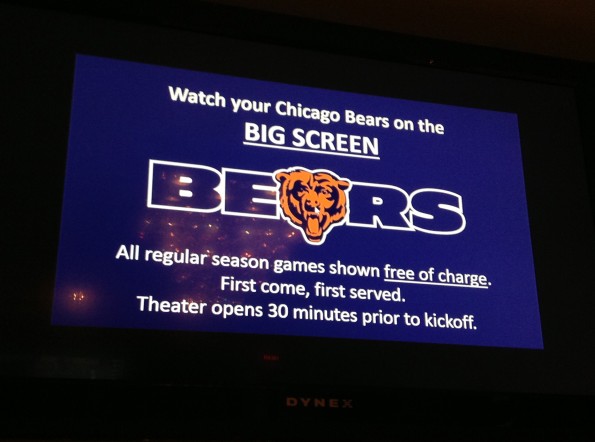