VIDEO: Powerful surprise as power line falls on swing set and energizes fence in backyard and fence between yards.

Arlington Heights police and firefighter/paramedics responded about 1:34 PM Sunday to a report of a line down with fire in the backyards of homes south of Miner Street and Gibbons Avenue Arlington Heights, IL ComEd power lines were down along the back property lines between Gibbons Avenue and Forrest Avenue. Lines in the middle of the block fell on a swing set of a yard on Forrest Avenue and caused intense arcing. 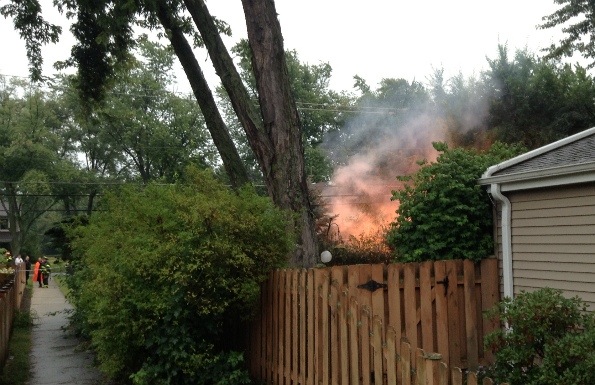 View from the Gibbons Avenue side of a downed power line between Miner Street and Kensington Road Sunday afternoon.

Police and firefighters kept neighbors away from the lines and energized fences in the backyards and side yards. Firefighters also evacuated residents from at least one house on Forrest Avenue.

After about 30 minutes, a huge arc exploded with energy and lit up a chain link fence all the way around toward the front of the house on Forrest Avenue. A neighbor also reported seeing fire and smoke around an air conditioner at the side of the house.

ComEd responded in about 30-45 minutes and went to work to de-energize the lines and repair the lines.

A large area of homes from Northwest Highway north and Dryden east were without power because of the line failure, which interrupted the television viewing of the Chicago Bears – Minnesota Vikings game late in the Second Quarter. Power was returned about 3:05 p.m.

No high winds were reported in the area. A light drizzle was falling at the time of the power line failure.