Peacock (file photo) … no peacocks allowed in Arlington Heights. A present-day Noah would have to find another community to start gathering for the ark.

No chickens, geese, ducks and farm animals are allowed in Arlington Heights. That ordinance was clearly outlined in January 2013 when the Arlington Heights village board denied variance requests from Mary Green, of the 200 block of South Mitchell, and Matt Scallon, of the 400 block of South Walnut, who wanted to keep up to three hens in their backyards. Both property owners were unanimously rejected, and there was rejection noted about the repeat attention to the subject of chicken farming.

After people challenged the laws with proposals for similar animals more recently, the laws were changed Monday night at the Village Board Meeting. The law now reads: “It shall be unlawful for any person to keep or raise any of the following animals or fowl in any residential district within the Village: pigs, cattle, horses, goats, sheep, or any other farm animals or similar animals, or any chickens, geese or ducks or similar fowl.”

Some officials have appeared a little annoyed at the amount of time spent on the topic of animals and pets in Arlington Heights.

For now officials have stated they will not create a comprehensive list from the Animal Kingdom and work with the “any similar” lingo. “I don’t know how we can make it any more clear,” said Robin Ward, Assistant Village Attorney.

* None of these were confirmed; it doesn’t seem that village officials have a sense of humor about this topic.

Recent animal news reports of animals, such as Burmese Pythons, killing children emphasize the importance of regulating dangerous animals. However, there are probably a few survivalist residents out there that wonder if the ordinance may be modified if the economy crashes and there are serious food shortages in the future. 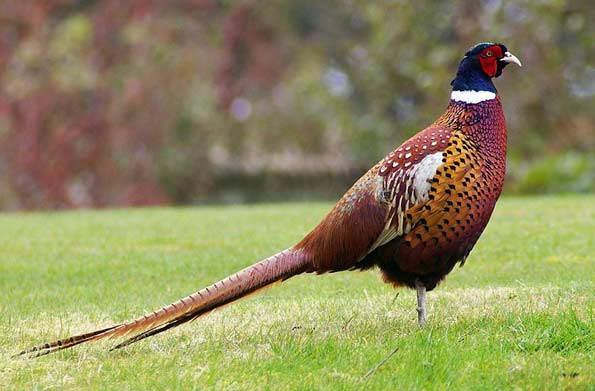 Pheasant were common in Arlington Heights just over 30 years ago (file photo).

Arlington Heights historically was a farming community with some farming activity still existing in the 1960s. Pheasant and quail use to have the run of neighborhoods as recently as the late 1970s in Arlington Heights. They were often seen after dawn flying in backyards near the property lines between neighbors. They nested in open fields that once existed, such as the large open field before Dominick’s, Dick’s, Best Buy, Walgreens and more stores were built at Arlington Heights Road and Palatine Road.