CBS broadcast network was dropped from Time Warner Cable Inc.’s TV service in New York, Los Angeles and other major markets Friday after long-running negotiations between the companies failed to reach a deal on fees.

The blackout, which started at 5 p.m. Eastern time, affected about three million subscribers. The blackout occurred more than one month after a previous agreement between CBS and Time Warner Cable expired. The deadline had been extended several times to allow negotiations on a new deal.

Time Warner Cable has accused CBS of demanding fees in certain big cities that are much higher than what the cable operator pays in other parts of the United States.

The blackout could have an effect on Aereo and Filmon.tv, which are two services that provide local television via the Internet to a user or subscriber’s computer or Apple iPad or other mobile device.

FilmOn Live TV streams over 200 LIVE TV Channels for free in SD. FilmOn users can watch TV on Apps or the Web for free over 500 VOD Channels. In Chicago, a user can watch CBS, NBC, ABC, CW/WGN, FOX and PBS for free in standard definition. 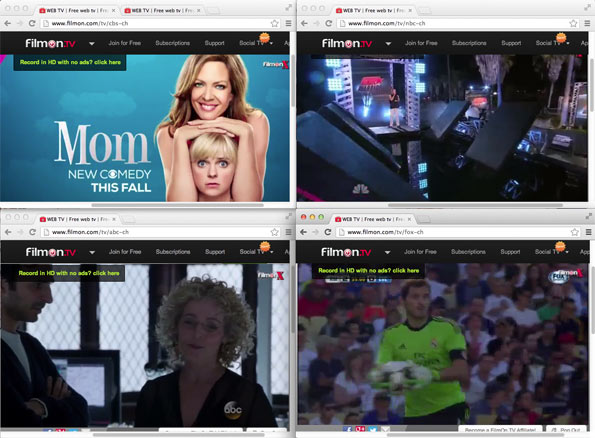 Without a look to see the terms of use regarding watching multiple channels on Filmon.com, a quick test showed that a Chrome Browser on a Mac was able to run four channels at once — CBS, NBC, ABC, and Fox. CW/WGN was also available. 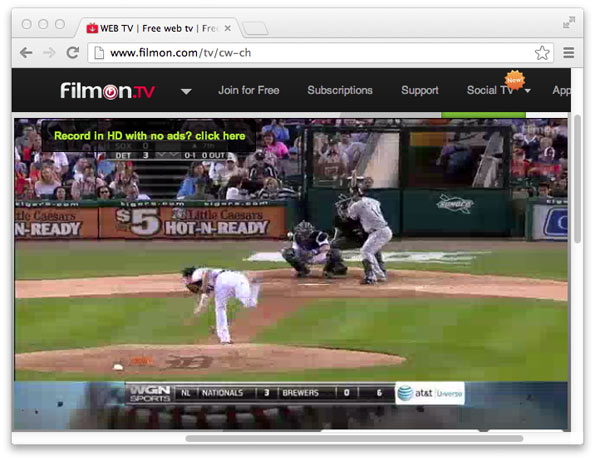 Filmon also has several other products that require accessories to pickup broadcasts over the air.

Aereo works differently than Filmon and provides their service by leasing an individual remote antenna at their location that is connected to a DVR at their location with both controlled by the user. Cities are limited.

A few months ago at least two networks were talking about shutting down their over-the-air broadcast to prevent services like Aereo and Filmon from “stealing” their programming. Of course, the streaming services believe they are just acting like antennas for the broadcast companies.

Time Warner Cable’s blackout of CBS networks entered its third day, cutting off audiences in the largest TV markets from seeing tonight’s “Under the Dome,” the highest-rated scripted series of the summer. If the blackout extends into the NFL season, that is when the real problems may start. Alex Sherman reports on Bloomberg Television’s “In The Loop.”

Related Report …
Digital-Lifestyle.com Two Networks Are Considering Pulling Their Broadcasts Off the Air Because of Aereo Antenna Farms