Barrington firefighters responded about 12:15 p.m. Tuesday, July 9, 2013 to a report of a house fire with fire showing from the roof in the 0-99 block of Terra Vita Drive in South Barrington. The fire quickly spread to the attic and second floor in a large luxury home. No fire hydrants exist in the neighborhood of the home. Firefighters used water tank trucks to bring water to the scene.

No injuries were reported and residents were safely sheltered at a neighbor’s house during the fire.

Hanover Park and Rolling Meadows also responded to standby in firehouses nearby with ambulances. A Wheeling fire engine also stood by in a fire house.

Lightning is suspected to have caused the fire. The radar image below shows a severe thunderstorm in the area (red image) about the time of the fire at 12:00 noon Tuesday. 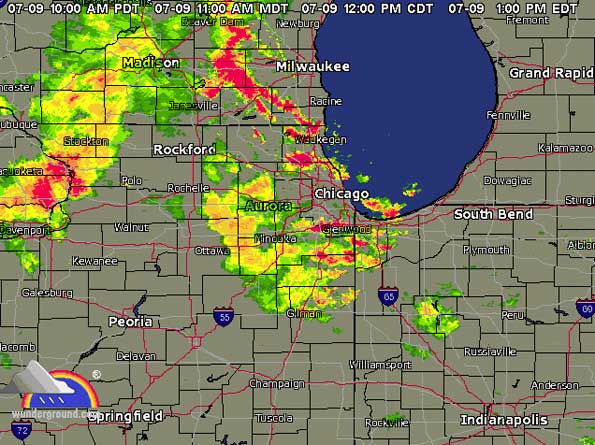 Severe thunderstorms developed rapidly and moved from southwest to northeast on Tuesday around noon when lightning is suspected to have struck a large luxury home near Barrington Road and Algonquin Road in South Barrington (See four images of radar from 10:00 a.m. to 1:00 p.m. Tuesday).

Lightning possibly struck the home from the back end of a thunderstorm where the front end of the thunderstorm cell was already heading north past Lake Cook Road by 12:00 noon on Tuesday.