Congressional Medal of Honor recipient Sammy Davis at Governor Pat Quinn’s side as the governor of Illinois sign three bills for veterans at the intersection of Dunton Avenue and Oakton Street.

Governor Pat Quinn celebrated the Fourth of July by signing a package of bills helping more members of the United States Armed Forces, Reserves and Illinois National Guard find employment as police officers, Emergency Medical Technicians (EMTs) and commercial vehicle drivers. The action is part of Governor Quinn’s agenda to support our Veterans and service members. The new laws will utilize the experience, teamwork and discipline service members gain on the front lines to help serve the public on the home front.

One bill honor a veterans experience and allows veterans to join the Illinois State Police without the prerequisite of a college degree. 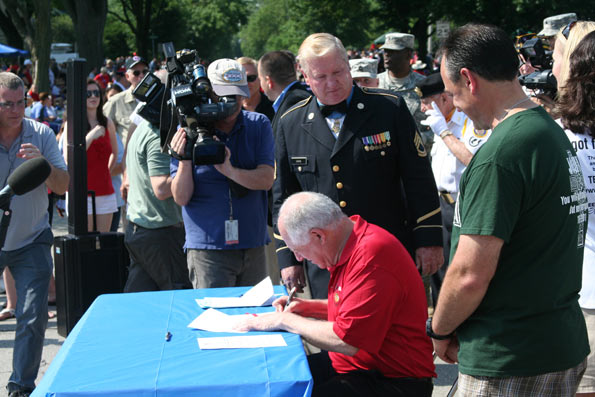