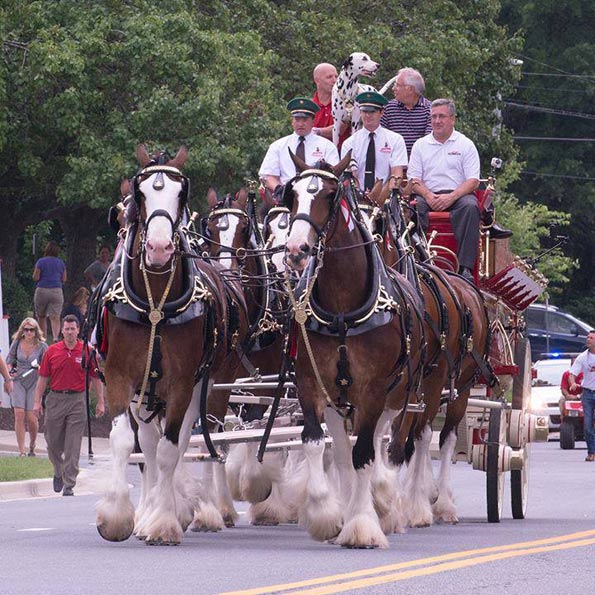 The world-famous Budweiser Clydesdales, the symbol of quality and tradition for Anheuser-Busch since 1933, are scheduled to make several appearances in Downtown Arlington Heights at Vail Avenue and Campbell Street on Wednesday, July 24, 5-7 p.m. This Clydesdale Parade is sponsored by CITY Beverage Arlington Heights.

The eight-horse hitch will be harnessed and hitched to the famous red beer wagon on Vail Avenue, adjacent to Harmony Park in the Downtown on July 24 from 4-5 p.m. On-street parking on Vail, between Sigwalt and Campbell, will be prohibited from 2-8 p.m. on July 24. Access to the Vail parking garage will remain open, as will all other on-street parking in the Downtown.

After the hitching process is concluded, the “Gentle Giants,” as they are often called, will parade through the Downtown from 5- 7 p.m., making stops for deliveries to several Downtown restaurants.

The Clydesdales will make two loops through the Downtown traveling north on Vail Avenue (by Harmony Park) to the Kiss N’ Ride and Payton Run areas just south of the Downtown Train Station. The parade will go east through the Kiss N Ride and Payton Run to Evergreen Avenue, south on Evergreen to Sigwalt Street, turn north on Dunton Avenue and then west on Campbell Street back to Harmony Park. The Clydesdales’ appearance in Arlington Heights is one of hundreds made annually by the traveling hitches. Canadians of Scottish descent brought the first Clydesdales to America in the mid-1800’s. Today, the giant draft horses are used primarily for breeding and show.

Horses chosen for the Budweiser Clydesdale hitch must be at least three years of age, stand approximately 18 hands – or six feet – at the shoulder, weigh an average of 2,000 pounds, must be bay in color, have four white legs, and a blaze of white on the face and black mane and tail. A gentle temperament is very important as hitch horses meet millions of people each year.

A single Clydesdale hitch horse will consume as much as 20-25 quarts of feed, 40-50 pounds of hay and 30 gallons of water per day. 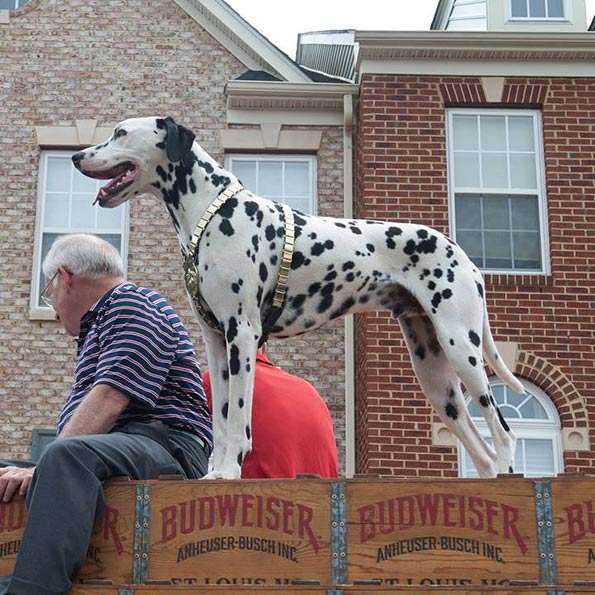 Each hitch travels with a Dalmatian. In the early days of brewing, Dalmatians were bred and trained to protect the horses and guard the wagon when the driver went inside to make deliveries.

The Budweiser Clydesdales can be viewed at the Anheuser-Busch breweries in St. Louis, Mo.; Merrimack, N.H.; and Ft. Collins, Colo. They also may be viewed at Grant’s Farm in St. Louis and at Warm Springs Ranch, the 300-plus acre Clydesdale breeding farm located near Boonville, Mo.

Alex, a 9-year-old boy from Michigan has loved horses since the age of 2. So it came as no surprise, then, when Alex chose to meet the world-famous Budweiser Clydesdales as his wish through the Make-A-Wish Foundation. Alex’s wish became a reality when he rode the Budweiser Clydesdale hitch around Busch Stadium as part of the St. Louis Cardinals’ opening day ceremony. With a smile from ear to ear, Alex waved to baseball fans, family and friends — taking in every moment of the ride. Later he told his mom: “It was the best day ever.”