A Boeing 777 has crashed while landing at San Francisco International Airport. Smoke is seen pouring from the aircraft on a runway or near the airport. There is a report that the tail of the aircraft broke off on impact, or fell off while landing. The crash occurred about 11:30 a.m. PT.

The airplane was arriving from Seoul, South Korea and apparently crashed sometime after touching down on Runway 28L. 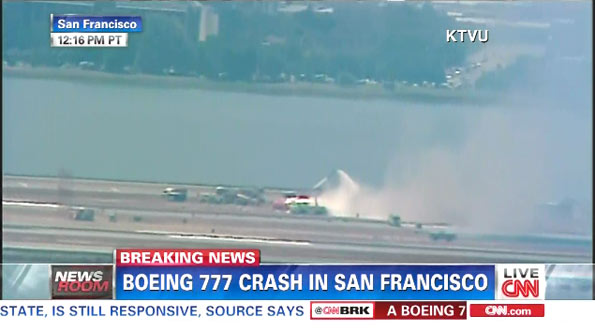 The emergency landing slides were deployed on the left side of the aircraft and social media reports that passengers were seen sliding down the chutes.

KVTU is reporting that the fire response is a 3-alarm fire, and Redwood City firefighters are assisting San Francisco firefighters. KVTU is reporting that firefighter/paramedics are treating burn victims at the scene. Most of the fire damage is on the top of the aircraft from just behind the cockpit to just at the back of the main wings. Much of the skin of the cabin is burned through in this front area of the aircraft.

Boeing 777 are the largest twin jet engine aircraft in the world designed for long-haul interoceanic flights.