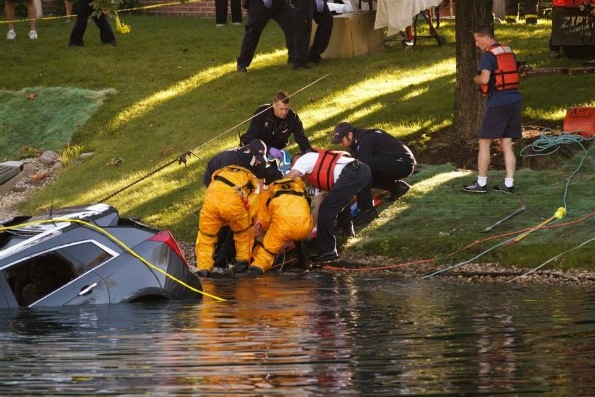 Firefighter/paramedics and divers work to help a victim that was just removed from an SUV that was submerged in a pond (PHOTO CREDIT: Bethany Detert).

IMPORTANT:
How to Survive Your Vehicle Submerged in Water: No Time to Waste Calling 9-1-1; Get Window Open

A witness said a police officer and a neighbor jumped into the pond, but the car immediately became submerged and was too deep for the police officer or the neighbor to reach the SUV — 2013 Cadillac SXR. The neighbor, a 48-year-old man who knows the victim, tried to rescue him, and saw the driver talking on a cell phone inside the sinking SUV. The neighbor tried to rescue the man, but the car sank in about one minute.

VIDEO: Dive Teams working with mutual aid response for an attempt to rescue 89-year-old Henry E. Laseke after his SUV hit a townhouse deck support, electric transformer and plunged into a condo retention pond at Ponds of Arlington.

Within 40 minutes fire department dive teams had the victim out of the vehicle and the victim on shore. Hillside Towing of Arlington Heights was also on the scene for the rescue attempt and hoisted the car with a line, which brought the SUV to the surface.

Divers immediately broke a passenger side window and removed the victim from the vehicle. The driver was later identified as Henry E. Laseke, age 89, of the 1500 block of Courtland Drive.

The victim was transported in life-threatening medical condition to Northwest Community Hospital related to being submerged in water. Laseke was pronounced dead about 10:00 a.m. today.

View Larger Map
An SUV was driven between the two townhouses on the east side of the pond, where it hit a support beam for a second-floor patio deck, a ComEd transformer, and eventually submerged in a pond on the northwest corner of the pond.

Another crew of firefighters setup sidescan sonar to look underwater for any other possible victims that may have escaped the vehicle, but may have still been in the pond. No other persons were found in the water.

A MABAS Division 1 Box Alarm was called for mutual aid for dive teams to respond to the incident at 7:16 a.m. Firefighter/divers from Buffalo Grove, Elk Grove Village, Palatine, Prospect Heights, Schaumburg and other communities assisted Arlington Heights firefighters and divers. A large Decontamination Truck also responded to decontaminate firefighters of possible pollutants in the pond. The truck is equipped with showers and other decontamination supplies and equipment.

Map of area where SUV was submerged in a pond … 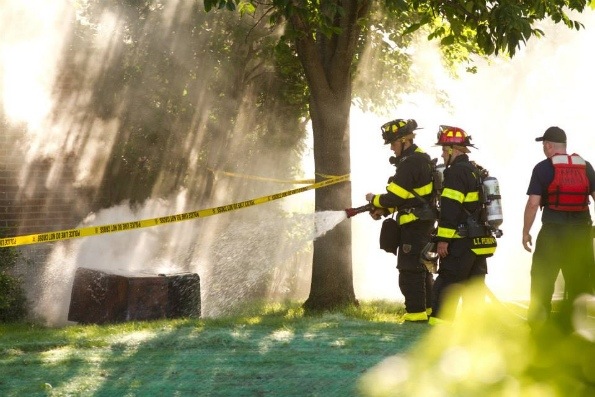 Firefighters extinguish and cool down a ComEd ground transformer after it was on fire and ignited when it was hit by an SUV that ended up in a pond (PHOTO CREDIT: Bethany Detert).