Arlington Frontier Days, Inc. 2013 Grand Marshals were Jeff Blomsness and Sammy Davis. Jeff Blomsness is CEO of North American Midway Entertainment — the carnival company that has served many years at Frontier Days. His co-marshal, Sammy Davis is a U.S. Army veteran and recipient of the highest military honor — the Congressional Medal of Honor. 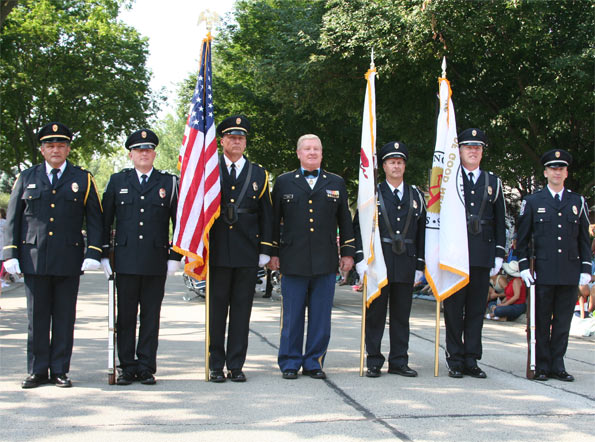 Sammy Davis enlisted in the Army directly out of high school in 1965, and of course received a lot of kidding in the Army. He volunteered for artillery because his father had been an artilleryman in World War II. He was assigned to the 4th Artillery, completing training, and asked to be sent to Vietnam.

On November 18, 1967, his unit of eleven guns and forty-two men was choppered into an area west of Cai Lay to set up a forward fire-support base named Firebase Cudgel. The howitzer base was supporting American infantrymen operating in the area. Shortly after midnight the next morning, Private First Class Davis’s Battery C came under heavy mortar attack, including an attack by an estimated fifteen hundred NVA Vietcong soldiers launched an intense ground assault, failing to overrun the Americans only because a river separated the two forces.

The squad was operating a 105 mm howitzer that fired eighteen thousand beehive darts in each shell. When Davis saw how close the enemy had come, he took over a machine gun and provided covering fire for his gun crew. An enemy recoilless rifle round hit the howitzer, and knocked the crew from the weapon, and knocked Davis into a foxhole. Outnumbered, Davis fired off at least one round from the damaged artillery piece before being overrun. He struggled to his feet, rammed a shell into the gun, and fired point-blank at the NVA who were advancing five deep directly in front of the weapon; the beehive round cut a number of the NVA, then an enemy mortar round exploded nearby, knocking Davis to the ground. Davis got up and kept firing the howitzer. When there were no more behive dart rounds left, he fired a white phosphorus shell,. Then he fired a round that was a “propaganda shell” filled with leaflets.

Next he swam across a river and rescued three wounded soldiers using an air mattress. During the continued fight overnight he was shot in the back and buttocks by friendly fire. If it weren’t for the flak jacket he was wearing, he would have probably been killed. He was hospitalized and was designated to go home, but he positioned General William Westmoreland to be allowed to stay with his unit. His petition was granted, and he was allowed to stay. Because of his injuries, he could not fight on the front line and was made a cook for the unit.

One year later, he was given the Congressional Medal of Honor from President Lyndon B. Johnson. Decades later in the film Forrest Gump, the actual filming of his award ceremony was used with the face and head of Forrest Gump (played by Tom Hanks) superimposed on the image of Sammy Davis. Forrest Gump’s character’s fictional heroic actions in the movie were loosely based on the real heroic actions of Sammy Davis, then private first class with Battery C, 2nd Battalion, 4th Artillery Regiment, 9th Infantry Division.

OFFICIAL CITATION
Citation: For conspicuous gallantry and intrepidity in action at the risk of his life and beyond the call of duty. Sgt. Davis (then Pfc.) distinguished himself during the early morning hours while serving as a cannoneer with Battery C, at a remote fire support base. At approximately 0200 hours, the fire support base was under heavy enemy mortar attack. Simultaneously, an estimated reinforced Viet Cong battalion launched a fierce ground assault upon the fire support base. The attacking enemy drove to within 25 meters of the friendly positions. Only a river separated the Viet Cong from the fire support base. Detecting a nearby enemy position, Sgt. Davis seized a machine gun and provided covering fire for his guncrew, as they attempted to bring direct artillery fire on the enemy. Despite his efforts, an enemy recoilless rifle round scored a direct hit upon the artillery piece. The resultant blast hurled the guncrew from their weapon and blew Sgt. Davis into a foxhole. He struggled to his feet and returned to the howitzer, which was burning furiously. Ignoring repeated warnings to seek cover, Sgt. Davis rammed a shell into the gun. Disregarding a withering hail of enemy fire directed against his position, he aimed and fired the howitzer which rolled backward, knocking Sgt. Davis violently to the ground. Undaunted, he returned to the weapon to fire again when an enemy mortar round exploded within 20 meters of his position, injuring him painfully. Nevertheless, Sgt. Davis loaded the artillery piece, aimed and fired. Again he was knocked down by the recoil. In complete disregard for his safety, Sgt. Davis loaded and fired 3 more shells into the enemy. Disregarding his extensive injuries and his inability to swim, Sgt. Davis picked up an air mattress and struck out across the deep river to rescue 3 wounded comrades on the far side. Upon reaching the 3 wounded men, he stood upright and fired into the dense vegetation to prevent the Viet Cong from advancing. While the most seriously wounded soldier was helped across the river, Sgt. Davis protected the 2 remaining casualties until he could pull them across the river to the fire support base. Though suffering from painful wounds, he refused medical attention, joining another howitzer crew which fired at the large Viet Cong force until it broke contact and fled. Sgt. Davis’ extraordinary heroism, at the risk of his life, are in keeping with the highest traditions of the military service and reflect great credit upon himself and the U.S. Army.

Governor Pat Quinn Signs Bill to Help Veterans Get Jobs as Police, Firefighter, Commercial Drivers with Congressional Medal of Honor recipient Sammy Davis at his side at Dunton Avenue and Oakton Street.