Now that Arlington Heights police and fire communications cannot be monitored by the media or by neighborhood watch and other safety groups, the Village of Arlington Heights public information efforts show a serious deficiency and lack of effort to keep the public aware in emergencies.

Some drivers were stranded in vehicles, which required mutual aid help from Prospect Heights firefighter/paramedics. 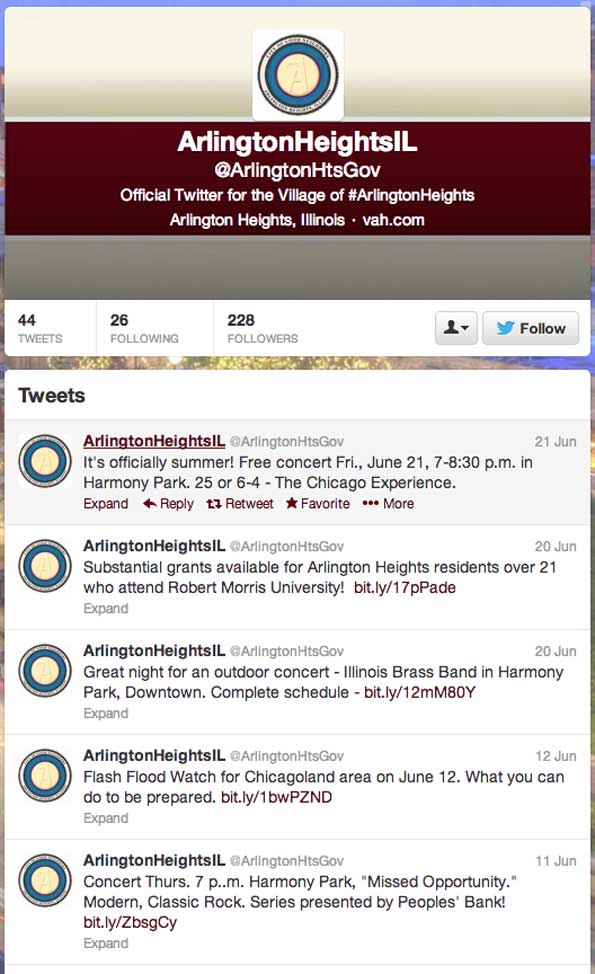 Wednesday June 26, 2013 screen shot of the Village of Arlington Heights official twitter account showing the lastest tweet about a free concert on June 21, 2013, and inconsistent public safety alerts — flood watch alert from June 12, 2013, but NO alerts for a flood watch and a flood warning on June 26, 2013.

The Village of Arlington Heights should either keep the official twitter account limited to community relations events or it should do a full-time job of alerting the community regarding public safety issues on its existing account or create a separate public safety account that combines information about police and fire safety activity.

Arlington Heights is a large enough community to handle this task with excellence. Cities, such as Chicago, Los Angeles, New York, Portland, Schaumburg and many others already notify their citizens of public safety issues, road closures, power failures, fires, crashes or other major emergencies in their communities.

VIDEO: Multiple storm and flooding scenes on the north side of Arlington Heights and Buffalo Grove on Wednesday June 26, 2013.

PLEASE REPORT YOUR FLOODING INCIDENTS, SEVERE WEATHER DAMAGE AND OTHER STORM INCIDENTS USING THE FORM AT THIS WEB ADDRESS …

It is important that you report your flooding incidents so that this can be reported to the Village of Arlington Heights for future reference.

The National Weather Service issued a Flash Flood Warning at 5:26 a.m. Wednesday, June 26, 2013 as heavy thunderstorms were in the process of dropping about 4 inches of rain in the area of Arlington Heights, Buffalo Grove, Palatine, Wheeling and other northwest suburbs.