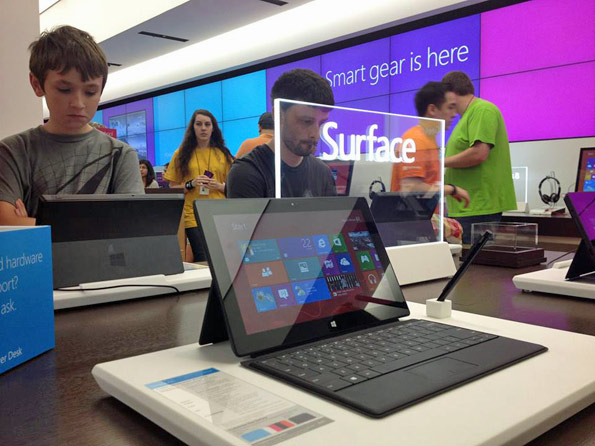 Inside the new Microsoft Store at grand opening on June 2, 2013 at Woodfield Mall.

The Microsoft Store is a recently developed chain of retail stores, that includes an online shopping site, owned and operated by Microsoft. The Microsoft Store sells computers, computer software and consumer electronics. The stores aim to “improve the PC and Microsoft retail purchase experience for consumers worldwide and help consumers make more informed decisions about their PC and software purchases.”

The Microsoft Store offers Signature PCs and tablets like their best-selling Microsoft Surface and from third parties such as HP, Acer, Dell, Lenovo, and Sony without demos or trialware (pre-installed free trials of certain third-party software that expire after a limited time).

Similar to the Apple Genius and Best Buy Geek Squad concepts, the Microsoft Store has The Answers Desk, which is designed to answer questions related to Windows, Office, and other Microsoft products. The Microsoft Store also offer class sessions as well as individual appointments.

The Schaumburg store (#41) opened on June 22, 2013 at Woodfield Mall. The first store in Illinois opened at Oakbrook Center on November 4, 2010. There is also a Microsoft Specialty Store at 520 North Michigan Avenue in Chicago. 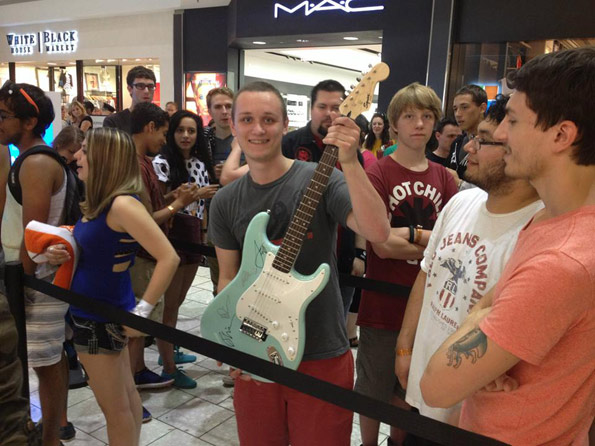 Austin Ridge, a 2012 graduate of Schaumburg High School, won a guitar signed by band members of Weezer after posting his photo on Twitter.

We’re giving away a guitar signed by @weezer to celebrate our grand opening in Schaumburg! RT and follow to enter. #MicrosoftIL

Wrapping up the day's celebration with a giveaway– @ridge97909 gets an autographed @weezer guitar! #MicrosoftIL pic.twitter.com/j7ZIROOtnU

More photos of the Microsoft Store …