MANHUNT IN CAMBRIDGE AND WATERTOWN TIMELINE

The FBI has released photos of two suspects in the Boston Marathon bombings and is asking for the public’s help in identifying them. 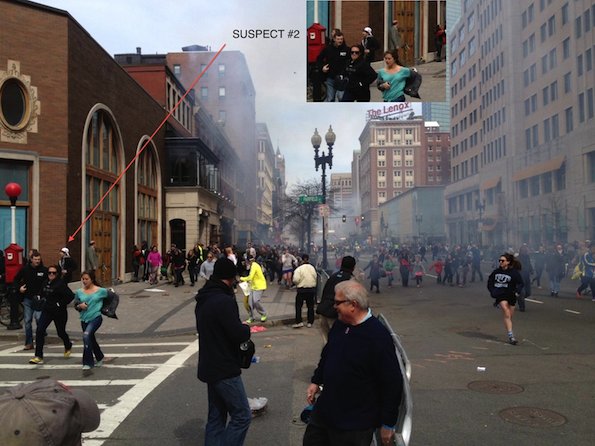 One of photos submitted to FBI … CROWDSOURCING MANHUNT and OFFICIAL POLICE MANHUNT for specific suspects begins (CROWDSOURCING — to combine the efforts of crowds of volunteers to directly benefit from the outcome).

FRI APR 19 2013 01:21 AM EDT — Report of carjacking by “middle eastern” men in the area of Third Street in Cambridge. Victim/driver held for about 30 minutes and released near gas station on Memorial Drive in Cambridge.

FRI APR 19 2013 01:21 AM EDT — Police pursuit shortly after report of carjacking with suspects throwing explosives from the Mercedes SUV as pursuit headed into Watertown.

FIRST SHOOTOUT: Witnesses in Watertown, Massachusetts report hearing explosions and a gunbattle as police converged on the area. Dozens of police officers and FBI agents are on the scene (YouTube Michael Julakis/WCVB/CNN).

FRI APR 19 2013 02:40 AM EDT –Massachusetts State Police report there may be more than two suspects.

FRI APR 19 2013 02:57 AM EDT — Police scanner traffic: Suspect at large “extremely armed and dangerous” … “could have an IED explosive device on him”.

BPD scanner has identified the names : Suspect 1: Mike Mulugeta Suspect 2: Sunil Tripathi. THIS INFORMATION TURNS OUT TO NOT BE THE PRIMARY TARGET SUSPECTS. 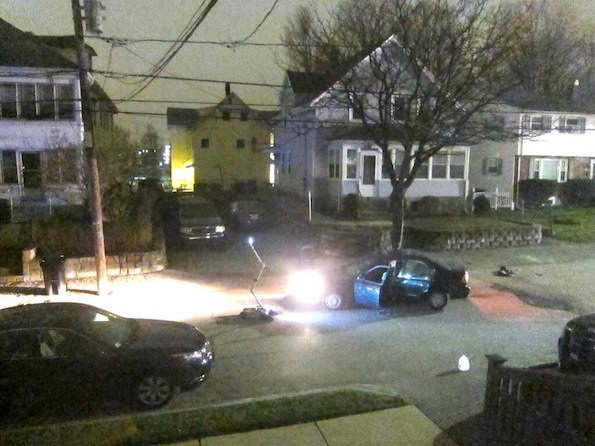 Tense time for neighbors: jraske on Twitter sends photos of street in front of family’s house minutes after shootout while peering out front window to street below.

There is a second robot that just drove off. twitter.com/jraske/status/…

FRI APR 19 2013 05:28 AM EDT — Press conference from physicians reporting Suspect #1 died of multiple gunshot wounds to the torso, and a blast injury from an explosive device.

FRI APR 19 2013 07:15 AM EDT — Report that suspect may have slipped the perimeter … police still searching. Police are gathering in riot gear.

FRI APR 19 2013 08:45 AM EDT — Brief gunfire then women in red jacket or sweatshirt brought out of home on corner of Willow Park and Quimby St Watertown, MA.

US Army helicopters are now sweeping the area twitter.com/jraske/status/…

PHOTO: A police SWAT team member readies his weapon as he stands in the middle of a #Watertown street. #manhunt twitter.com/BostonGlobe/st…

BEFORE SECOND SHOOUTOUT: Police on loudspeaker announcing to fellow officers that someone is in the boat, and ordering Suspect #2 to surrender.

BREAKING NEWS: Globe photographer can hear police say, “We know you’re in there. Come out on your own terms. Come out with your hands up.”

CAPTURED!!! The hunt is over. The search is done. The terror is over. And justice has won. Suspect in custody.

RT @globedavidd: Gotta love this. Very real. RT @mayortommenino: On the radio. “Your mayor is very proud of you” twitter.com/mayortommenino…