EXPLOSION CAUGHT ON VIDEO (6:52): Explosion with debris flying and heavy smoke from a commercial building where paint and paint striping systems are manufactured at 640 Industrial Drive in Cary, Illinois (VIDEO CREDIT: 3GSTORE.COM).

Three people were seriously injured at a paint factory explosion on Industrial Drive in Cary Tuesday after, but fortunately are expected to survive the injuries. All three victims, Jose Martinez, 28; Jorge Anastio, 28; and Robert Hance were transported to Advocate Good Shepherd Hospital near Lake Barrington. Two of the victims, Jose Martinez and Robert Hance, were transferred by medical transport helicopters to the hospital burn unit at Loyola University Medical Center in Maywood. Both of the victims were listed in serious condition at Loyola University Medical Center. Jorge Anastio was transferred to Saint Anthony Medical Center in Rockford. He is listed in fair condition. 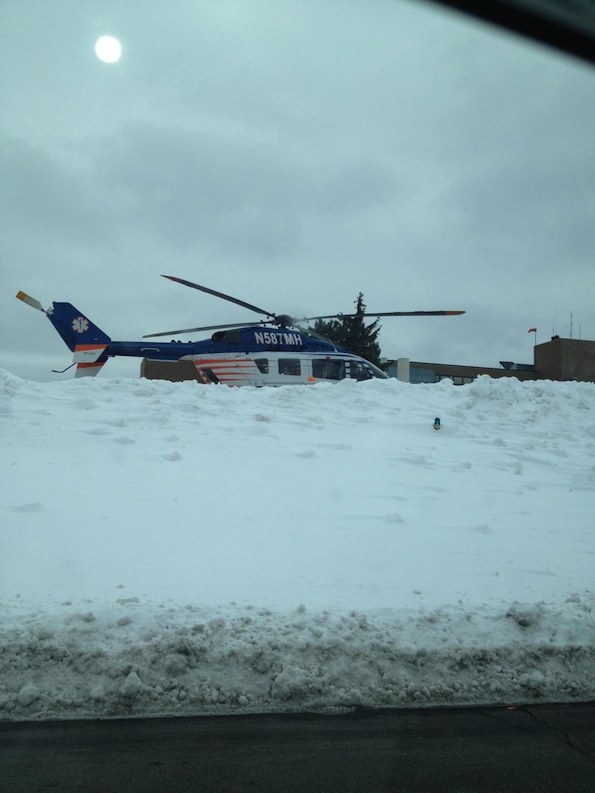 FLIGHT FOR LIFE at Good Shepherd Hospital for transfer of one of the victims from an explosion and fire at Fox Valley Systems Tuesday afternoon.

Cary firefighers responded about 1:10 p.m. Tuesday, March 6, 2013 to an explosion and fire at 640 Industrial Drive. Witnesses on the block reported seeing one man rolling on the ground at the front of the building immediately after the explosion. Several smaller pops and explosions occurred, and one larger explosion occurred about 7 minutes into the incident. Heavy black smoke rolled out of the commercial building. A brick wall at the front of the building was also blown out and destroyed.

Components used in the mixture of colorful paints made at the factory are highly flammable, and can be ignited from exposure to a static spark or even a hot light bulb.