Entry of Christ into Jerusalem (1320) by Pietro Lorenzetti — an Italian painter, active between approximately 1306 and 1345.

Palm Sunday is marked by the distribution of palm leaves (often tied into crosses) to the assembled worshippers. In the Gospels according to Matthew, Mark, Luke, and John; Jesus’ triumphal entry into Jerusalem took place about a week before His Resurrection.

According to the Gospels, Jesus rode a donkey into Jerusalem, as people lay down their cloaks in front of him, and also lay down small branches of trees. The people sang part of Psalm 118: 25–26 … “Blessed is He who comes in the name of the Lord. We bless you from the house of the Lord …”

The symbolism of the donkey ride may refer to the Eastern tradition that the donkey is an animal of peace, versus the horse, which is the animal of war. In the days, king came would ride upon a horse symbolizing war and would ride on a donkey symbolizing peace. Jesus’ entry to Jerusalem is believed to have symbolizes his entry as the Prince of Peace, not as a war-waging king.

The palm branch later became a symbol of Christian martyrs and their spiritual victory or triumph over death.

25 Save us, we pray, O Lord!
O Lord, we pray, give us success!
26 Blessed is he who comes in the name of the Lord!
We bless you from the house of the Lord.

Easter is linked to the Jewish Passover by much of its symbolism, as well as by dates in the calendar. Passover 2013 begins at sundown Monday, March 25 and ends the evening Tuesday, April 2. 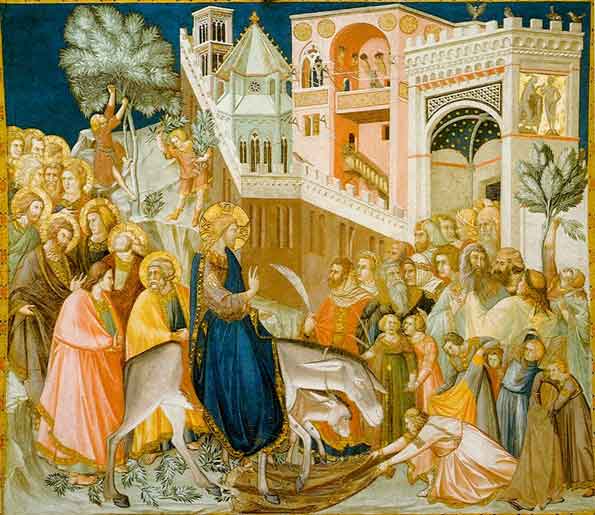 Entry of Christ into Jerusalem (1320) by Pietro Lorenzetti — an Italian painter, active between approximately 1306 and 1345.