Illinois State Police Trooper James Sauter was killed about 11:00 p.m. Thursday while he was on-duty and stopped on the inside shoulder of the southbound lanes of I-294. His squad car was stopped after he had assisted a motorist nearby, and he was about to return to patrol work.

Glenview and Northbrook firefighter/paramedics responded about 11:03 p.m. to a report a semi-trailer truck on fire on the southbound lanes of the Tri-State Tollway I-294, just south of Willow Road. A few minutes later rescuers were updated that a car was under the semi-trailer truck, and that a victim was trapped in the car.

Firefighters approaching the scene reported a fire burning on the horizon on the tollway. On arrival firefighters reported a squad car under the truck.

Firefighter/paramedics also received a report of a crash with fire north of Willow Road on I-94. Northbrook firefighters responded to the tollway crash report north of Willow — reported to be just south of Lake Cook Road.

No crash was found north of Willow Road. Northbrook firefighters then stood by near Willow Road in case they were needed for the crash at Mile Marker 48.

Glenview firefighters called for assistance for a water tanker from Prospect Heights.

The driver of the United Van Lines moving truck was not injured, but was transported to Glenbrook Hospital as a precaution. He is also undergoing tests related to the investigation.

Sauter received a Lifesaving Medal while still a cadet in October of 2008 after discovering a motorcycle on its side on eastbound I-80. The Illinois State Police troopers know him for running across all lanes of traffic with his first responder bag. He cleared blood from the woman’s airway, and she survived. 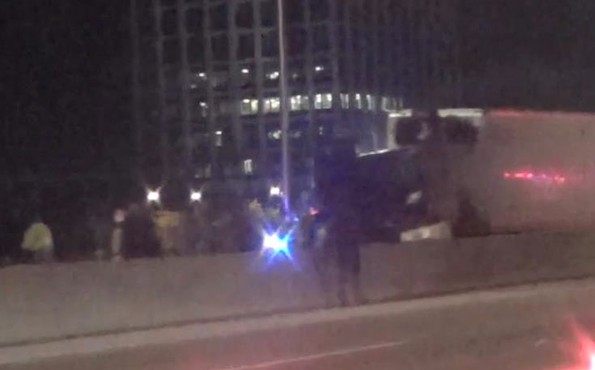 Semi-trailer truck on the inside shoulder of the southbound Tri-State Tollway — viewed from the northbound lanes of I-294.