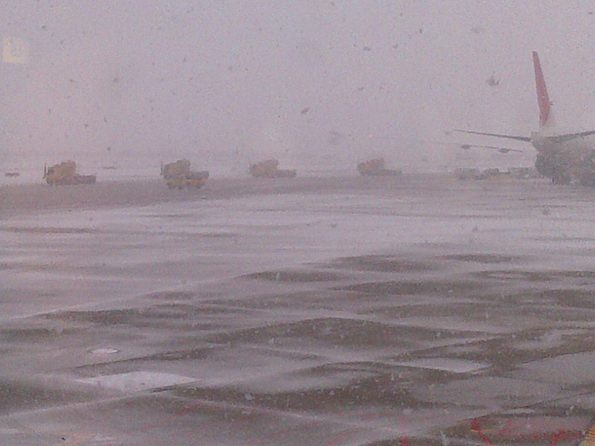 Photo at O’Hare International Airport Terminal 3 submitted at about 9:47 a.m. Tuesday. By 10:30 a.m. Tuesday, more than 1,000 flights had been canceled at O’Hare and Midway airports.

The Low Pressure center is about right on top of us at 3:00 p.m. with the backspinning radar precipitation bands evident in the area. Significant snow bands are still in the area, and significant snow is expected to continue at least until 8:00 p.m. If snow continues at the current rate over 1.0 inch per hour, an additional 6 inches may accumulate by 8:00 p.m., bringing the total at 8:00 p.m. to 12.5 inches. An additional 1-2 inches could accumulate between 8:00 p.m. and midnight.

However, snowfall rate will likely decrease, bringing an additional 3-6 inches between 3:00 p.m. and midnight, instead of and additional 6-8 inches. The Cardinal is expecting today’s total accumulation to be 9-12.5 inches. Some light snow with much less accumulation is expected to continue overnight and throughout the day on Wednesday.

No cold snap is expected after the snow storm, in fact we will be in the mid-30’s Wednesday and Thursday. A high of 39°F is forecast for Friday.

This Afternoon
Snow. The snow could be heavy at times. High near 33. Northeast wind around 15 mph, with gusts as high as 25 mph. Chance of precipitation is 100%. Total daytime snow accumulation of 3 to 7 inches possible.

Wednesday Night
A 30 percent chance of snow showers, mainly before 7pm. Cloudy, with a low around 23. North wind 5 to 10 mph.

Thursday
A 20 percent chance of snow showers before 7am. Partly sunny, with a high near 35. Calm wind becoming east around 5 mph in the afternoon.

Thursday Night Partly cloudy, with a low around 20.

Friday Mostly sunny, with a high near 39.

A Winter Storm Warning remains in effect until midnight.

* TIMING…SNOW WILL INCREASE IN INTENSITY THROUGHOUT THE
REMAINDER OF THIS MORNING INTO THE AFTERNOON HOURS. THEN SNOW
WILL CONTINUE THROUGH EARLY THIS EVENING BEFORE TAPERING OFF
AROUND MIDNIGHT TONIGHT.

* SNOW ACCUMULATION…7 TO 10 INCHES WITH LOCALIZED AMOUNTS UP TO
12 INCHES POSSIBLE.

* MAIN IMPACTS…ACCUMULATING SNOW WILL CONTINUE THROUGH THIS
EVENING. SNOW COULD FALL RATHER HEAVILY AT TIMES WITH SNOW FALL
RATES OF 1 TO 2 INCHES PER HOUR POSSIBLE THIS AFTERNOON. WINDS WILL
INCREASE TO 15 TO 25 MPH AND GUSTY BY THIS EVENING WHICH COULD
RESULT IN SOME BLOWING AND DRIFTING SNOW IN OPEN AREAS. SNOW IS
EXPECTED TO BE FALLING AT A GOOD CLIP DURING THIS AFTERNOONS
RUSH HOUR…SO PLAN ACCORDINGLY FOR POOR TRAVEL CONDITIONS.

* OTHER IMPACTS…TRAVEL THROUGH O`HARE AND MIDWAY AIRPORTS WILL
LIKELY BE SIGNIFICANTLY AFFECTED BY THIS STORM.

A WINTER STORM WARNING FOR HEAVY SNOW MEANS SEVERE WINTER WEATHER
CONDITIONS ARE EXPECTED. SIGNIFICANT AMOUNTS OF SNOW ARE FORECAST
THAT WILL MAKE TRAVEL DANGEROUS. CONSIDER ONLY TRAVELING IF IN AN
EMERGENCY. IF YOU MUST TRAVEL…KEEP AN EXTRA FLASHLIGHT…
FOOD…AND WATER IN YOUR VEHICLE IN CASE OF AN EMERGENCY.