A total of 3.0 inches of wet snow fell from about 11:00 p.m. Thursday until about 6:00 a.m. Friday. Snow cover at noon Friday in Arlington Heights was 3.0 inches on grassy areas and unplowed pavement areas. The snow was wet and good packing. The snowfall ties the one-day snowfall for the season, but is short of another total storm snowfall when 3.75 inches fell from about 1:00 p.m. Thursday February 7, 2013 until 1:00 a.m. Friday February 8, 2013. 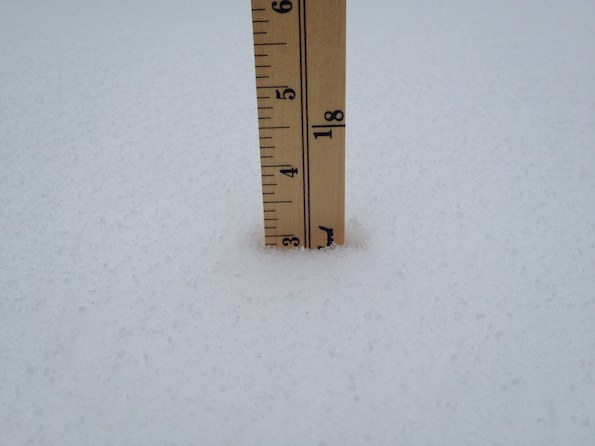 Photo of snowfall accumulation with the angle of the camera and parallax making the snow depth appear to be less than the actual 3.0 inches.

At noon Friday, radar showed a very light band of precipitation passing from southwest to northeast over Cook County, DuPage County, and Lake County (Illinois). Very light snow flurries were associated with the radar image. A Winter Weather Advisory remains in effect until 6:00 p.m. Friday. Only 0.1 inch of snow is forecast for the remainder of Friday in Arlington Heights.

By 11:00 a.m. Friday most streets and highways were fairly quiet and cleaned up well.

This Afternoon
Snow likely, possibly mixed with freezing drizzle. Patchy fog. Otherwise, cloudy, with a high near 33. Southwest wind around 10 mph, with gusts as high as 15 mph. Chance of precipitation is 70%. Little or no ice accumulation expected. Total daytime snow accumulation of less than a half inch possible.

Saturday
Night Cloudy, then gradually becoming partly cloudy, with a low around 17. West wind 5 to 10 mph, with gusts as high as 15 mph.
Sunday Mostly sunny, with a high near 33. West wind around 5 mph becoming calm in the afternoon.

Sunday Night
Mostly cloudy, with a low around 23.

Monday
Mostly cloudy, with a high near 35.

* TIMING…LIGHT SNOW…DRIZZLE AND FREEZING DRIZZLE WILL CONTINUE
INTO THIS AFTERNOON. ADDITIONAL SNOW ACCUMULATIONS WILL BE LESS
THAN ONE INCH WITH LITTLE OR NO ICE ACCUMULATION EXPECTED.

* IMPACTS…UNTREATED SURFACES MAY BE SLICK OR SLIPPERY.

A WINTER WEATHER ADVISORY FOR SNOW MEANS THAT PERIODS OF SNOW
WILL CAUSE PRIMARILY TRAVEL DIFFICULTIES. BE PREPARED FOR SNOW
COVERED ROADS AND LIMITED VISIBILITIES…AND USE CAUTION WHILE
DRIVING.