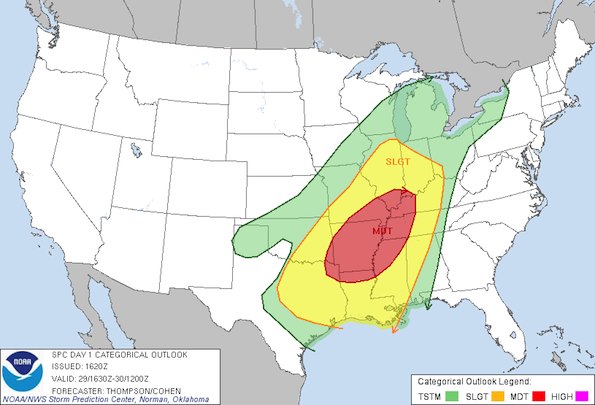 While the overall risk zone contracted away from the north suburbs, the higher risk area of severe weather has been expanded and now includes almost all of Arkansas, far southern Illinois, western Kentucky, western Tennessee, northwest Mississippi, and northern Louisiana.

Generally this type of outlook is reliably correlated with a future confirmed tornado or multiple tornados somewhere in the risk areas. The greatest severe risk is expected this evening and tonight.

Thunderstorms are still likely in the north and northwest suburbs, and a Flood Watch is in effect. It is not unlikely that a Severe Thunderstorm Warning could be issued in northern Chicagoland with the greatest chance for storms and heavy rain between 6:00 p.m. and midnight Tuesday. Rainfall amounts of 1-2 inches are possible in the northwest suburbs from about 11:00 a.m. until 3:00 p.m. Wednesday.