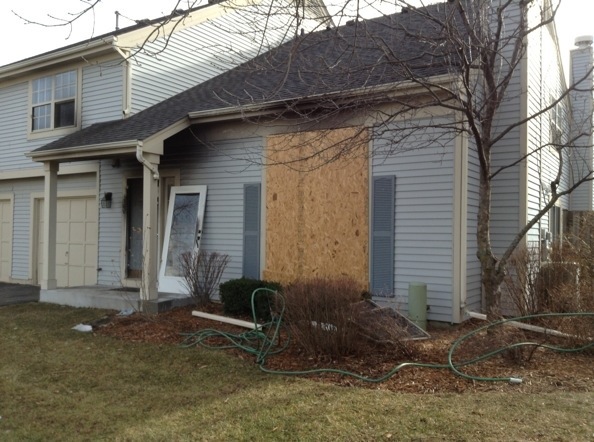 Fire at townhouse on Knollwood Drive with damage confined to a front living room, and minor damage to exterior siding, front door and gutters.

Palatine police and firefighter/paramedics responded about 11:56 PM Wednesday to a report of a townhouse fire at 1360 North Knollwood Drive. While police and firefighters were responding a neighbor reported some people were outside of the townhouse, but that some people might still be inside. Police were on the scene within two minutes and reported the house was engulfed with flames. Fire was coming out the front windows and front door on the first floor.

Firefighters on the scene within three minutes upgraded the call to working fire call. A Palatine Rural engine and a Lake Zurich ambulance and truck responded for mutual aid.

Firefighters/paramedics reported receiving a victim from police at about 12:06 a.m. Initial fire crews were met by the homeowner at the front door trying to extinguish the fire with a nearby garden hose. The homeowner was the only occupant of the unit and did sustain smoke inhalation and burn injuries to his hands. The 41-year-old male stated he awoke from bed to find smoke in the townhouse and found the living room on fire. It is unclear if smoke detectors were working. He was treated at the scene and transported to Northwest Community Hospital, Arlington Heights, where he was admitted. Two cats were found inside the unit and taken by Palatine Police Animal Control for care to Golf Rose Veterinary Hospital. A third cat succumbed to smoke.

Firefighter/paramedics received a report that they were checking the attic for extension, and the working fire response was held up at about 12:07 a.m.as the fire was extinguished and under control at that time. The fire was contained to the living room and contents but the entire unit sustained extensive smoke damage throughout and deemed uninhabitable.

The cause of the fire is under investigation by the Palatine Fire Department. Damage was limited to one unit and estimated at $150,000.

The Palatine Fire Department was assisted by the Palatine Rural Fire Department. The Lake Zurich truck and ambulance were apparently held up. Quick action by Palatine firefighters knocked the fire eliminating the need for mutual aid fire services.