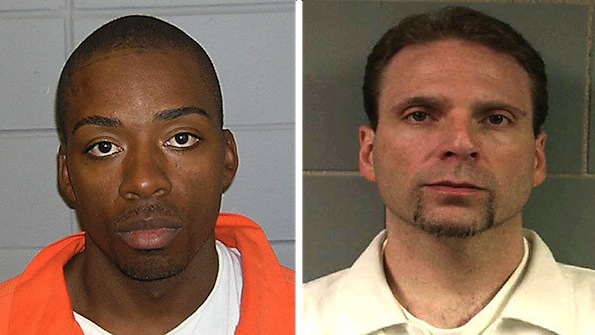 The FBI, along with federal, state and local law officers, are asking for the public’s assistance in locating and apprehending Jose Banks (left) and Ken Conley, who escaped from the Metropolitan Correctional Center in downtown Chicago this morning. (FBI photos).

Two convicted bank robbers, one known as “The Second-Hand Bandit” escaped from the Metropolitan Correctional Center, 71 W. Van Buren Street about 8:45 a.m. The inmates’ cell was empty when it was checked. The previous check was at 5:00 a.m. An improvised rope was discovered dangling at about 15 stories up on the south side of the Metropolitan Correctional Center (MCC).

The two, believed to be traveling together, were possibly sighted in the Tinley Park area this morning. Ken Conley perviously lived in Tinley Park and worked at Club 390 strip club in Chicago Heights.

Jose Banks (aka Second Hand Bandit) is known to wear disguises (fake beard) and Ken Conley is know to point guns at people in a threatening manner.

The FBI urges citizens to call 312-421-6700 with any information about the convicts. Of course, if citizens don’t remember the FBI number, they can call 9-1-1.