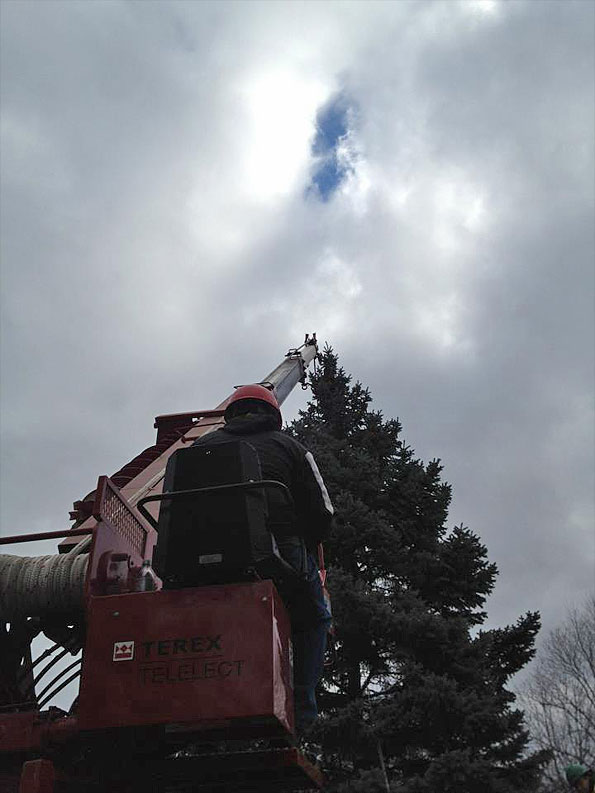 There is alway a large crowd gathered at North School Park at Arlington Heights Road and Eastman Street to enjoy the Annual Tree Lighting Ceremony at the park. The event, traditionally the Friday after Thanksgiving, will be held on Friday, November 23, 2012 at 4:30 p.m.

Expect the return of carolers (Metropolis Youth Choir), kettle corn and hot chocolate as Mayor Arlene J. Mulder and Park District officials count down to the magical “flip of a switch” that will light up ornate, holiday displays that fill North School Park as well as a large 30-foot Colorado Blue Spruce that many residents still call a Christmas Tree. The tree is atop the Virgil Horath fountain in the center of the North School Park.

The Colorado Blue Spruce tree was donated by Mike Krafton and family from their home on the near north side of Arlington Heights.

Once the lights are flipped, the entire Downtown will feature tree-lined streets lit with twinkling white lights, which make for a beautiful backdrop while window-shopping and restaurant hopping this holiday season. All holiday displays remain lit and will stay up until January 6th, 2013.

Christmas Trees and Holiday Trees are common around the world — often associated with city or town festivities marking the lighting of the tree.

The United States’ National Christmas Tree has been lit each year since 1923 on the South Lawn of the White House.

The City of Chicago celebrated their tree lighting with the “Christmas Tree Lighting and UL Santa House Kick Off the Holidays” festivities on Tuesday, November 20, 2012at Daley Plaza.

In 2005, the city of Boston renamed the spruce tree used to decorate the Boston Common a “Holiday Tree” rather than a “Christmas Tree”. The name “Holiday Tree” drew a poor response from the public and it was reversed after the city was threatened with several lawsuits.

The Boston Common Christmas tree arrived on Friday as a crowd of children and Santa Claus watched. The tree is an annual gift from the people of Nova Scotia as a way to thank the Boston community for providing emergency assistance when its capital, Halifax, was devastated by an explosion in 1917.

Images captured by K3Lights.com, a website that publishes holiday light images from the counties of Cook, Dupage, Lake, Kankakee, Iroquois and Will.

According to their website, K3 Lights (K3Lights.com) shot over 5,000 homes — spanning well over 2500 miles of paved, gravel, and slippery roads.