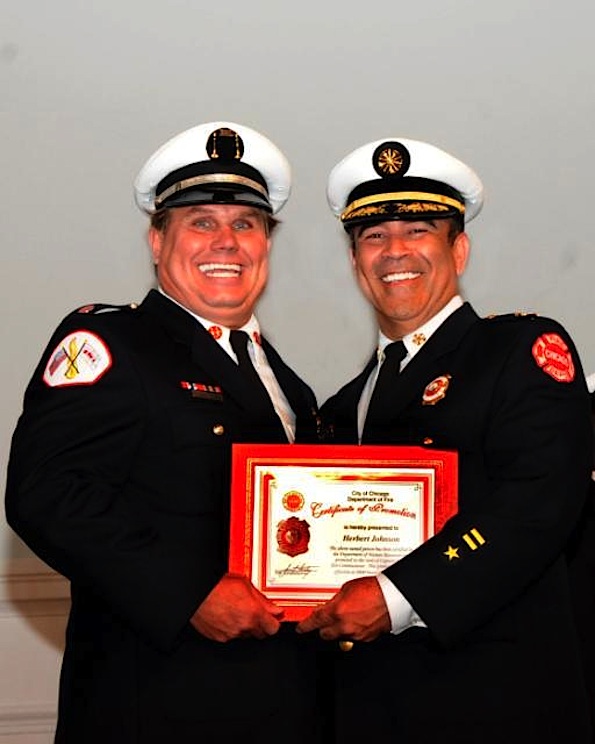 A Chicago Fire Department firefighter died tonight while he was being treated in the University of Chicago Hospitals Emergency Department for injuries he suffered in a house fire. The house fire, initially reported in an attic, was in a 2.5-story home in the 2300 block of 50th Place.

THE DECEASED FIREFIGHTER WAS IDENTIFIED AS CAPT. HERBERT JOHNSON, 54. THE PRECESSION LEFT THE HOSPITAL JUST BEFORE 9:00 PM.

The firefighter was pulled from the house after an incident that occurred while firefighters were battling the fire. A MAYDAY was declared as the firefighter was trapped or unable to get himself away from danger in the incident. Reportedly smoke from the fire was visible from Midway International Airport.

Firefighters were called to the scene at 5:15 p.m. and initially a Still and Box was ordered by a Battalion Chief at 5:21 p.m. A 2-11 extra alarm and a MAYDAY were ordered and declared just before 5:30 p.m.

Firefighters were administering CPR as the firefighter was rescued from the house, and transported to University of Chicago Hospitals.

Another firefighter was transported to Level I Trauma Center Advocate Christ Medical Center in Oak Lawn. Both firefighters were injured while inside the house.

An EMS Plan 1 or Emergency Medical Services Plan 1, which sends six ambulances to the scene, also was also ordered automatically as a precaution.

At least 10 people were in the house when the fire was discovered.