Illusionist David Blaine lit up New York’s Pier 54 Friday for his latest high voltage feat. Blaine will spent three days and nights standing in the middle of a million volts of electric currents streamed by tesla coils with music generated by the coils.

Nikola Tesla developed the principles of the Tesla coil in 1888. Tesla coils (primary and secondary) are used to produce high-voltage, low-current, high frequency alternating-current electricity. The Tesla coils deliver lightning-like plasma discharges into the air. As the secondary coil’s energy (and output voltage) continue to increase, larger pulses of displacement current ionize and heat the air at the point of initial breakdown, which forms a very conductive “root” of hotter plasma, called a leader, that projects outward from the toroid — the spherical metal frame known as a top terminal. 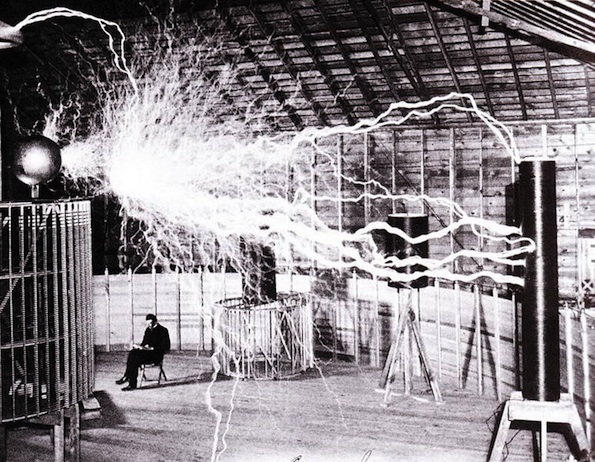 Publicity photo of Nikola Tesla sitting in his laboratory in Colorado Springs in December 1899. Photo was taken by Dickenson V. Alley, photographer at the Century Magazines. The laboratory was built in 1899. Tesla sent a copy of this photograph to Sir William Crookes in England in 1901.

Watch Master illusionist and endurance artist David Blaine as he conceives of his next great feat. David channels the spirt of famed early electrical pioneer Nikola Tesla and examines the close relationship between technology and magic.

David Blaine is best known for his high-profile feats of endurance, and has made his name as a performer of street and close-up magic.

On April 5, 1999, Blaine was entombed in an underground plastic box underneath a 3-ton water-filled tank for seven days across from Trump Place on 68th St. and Riverside Drive.

On November 27, 2000, Blaine began a stunt called “Frozen in Time”. Blaine stood encased in a massive block of ice located in Times Square, New York City. He was lightly dressed and already shivering before the blocks of ice were sealed around him. A tube supplied him with air and water while his urine was removed with another tube. He was encased in the box of ice for 63 hours, 42 minutes and 15 seconds before being removed with chain saws.

He has been involved in several other feats involving standing on a 100-foot narrow pillar for 35 hours, freeing himself while shackled in a moving gyroscope, maintaining an endurance stunt holding out for 44 days without food or nutrients — only water, and other stunts.