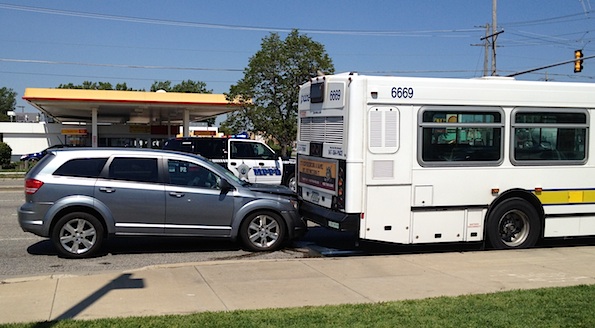 Mount Prospect police and firefighter/paramedics responded about 6:53:48 PM Wednesday to crash of a car into a city bus on Algonquin Road near Elmhurst in Mount Prospect. Firefighter/paramedics received a report that three people were injured. The crash was on eastbound Algonquin Road in the right lane, just west of Elmhurst Road. A silver Dodge sedan apparently rear-ended a Pace Bus near a bus stop at the corner. No word on whether people had just entered or or left the bus at the bus stop.

Yesterday a smaller Pace Bus was totaled when it burned near Walmart at Meacham Road and Nerge Road in Elk Grove Village. See picture at Facebook.com/CardinalEmergencies … Elk Grove Village and Schaumburg firefighters responded to extinguish the fire.