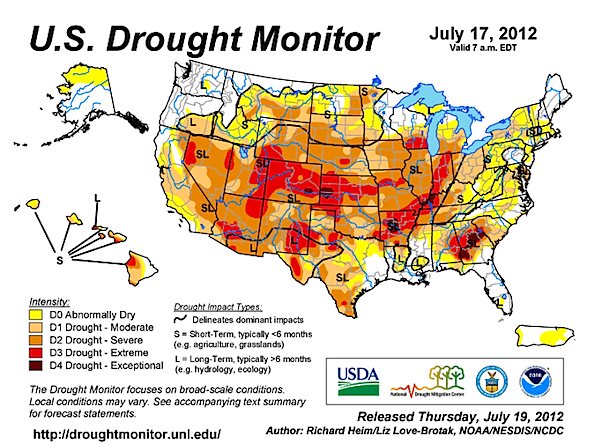 As of July 23, 2012 the United States is experiencing the worst drought conditions since 1956. Currently the drought is considered in third place compared to the Dust Bowl ranging from 1930 to 1936 (some areas until 1940), and a United States drought during the 1950’s. Dryness and drought, exacerbated by above-normal temperatures, have been increasing both in extent and intensity across much of the central and northern U.S. Based upon the July 10 U.S. Drought Monitor, nearly 61 percent of the contiguous U.S. was in drought (D1-D4), the highest such value for the U.S. Drought Monitor since its inception in 2000. The drought and heat arrived at a critical time for Midwestern agriculture, especially corn.

According to the National Weather Service, the combination of heat and dryness has severely reduced the quality and quantity of the corn and soybean crop, with 38 percent of the corn and 30 percent of the soybeans rated as poor or very poor as of July 15 by NASS/USDA. Some states, such as Kentucky, Missouri, and Indiana, had over 70 percent of their corn adversely rated. Unfortunately, drought is expected to develop, persist, or intensify across these areas, and temperatures are likely to average above normal. Some widely-scattered relief may come in the form of cold front passages or organized thunderstorm clusters (MCSs), but widespread relief for much of the area is not expected.

In the Southeast, recent widespread thunderstorm activity has slightly eased drought there, and the 3-month outlook favors increased odds for above normal precipitation along the central Gulf. This is due to the greater likelihood of a tropical system affecting these areas and from sea-breeze triggered thunderstorms. Therefore, some improvement is expected across the Deep South, from coastal Texas eastward to South Carolina. Across the Southwest, the odds favor an active (wet) southwest monsoon in both the 1- and 3-month precipitation outlooks. As a result, improvement is anticipated across much of Arizona and western New Mexico as the summer monsoon continues, with some improvement in other parts of the region.

Drought persistence is the best bet across the remaining portions of the Western U.S. since late summer and early fall are typically dry. In Hawaii, subnormal seasonal rainfall is expected which should maintain drought on the leeward (west) sides while expanding it toward the windward (east) sides.

Lastly, an El Niño Watch continues, with the forecaster consensus reflecting increased chances of an El Niño beginning in July-September. El Niño/La Niña-Southern Oscillation, or ENSO, is a climate pattern that occurs across the tropical Pacific Ocean roughly every five years. The Southern Oscillation refers to variations in the temperature of the surface of the tropical eastern Pacific Ocean (warming and cooling known as El Niño and La Niña respectively). Winters, during the El Niño effect, are warmer and drier than average in the Northwest, Northmidwest, and Northmideast United States, and therefore those regions experience reduced snowfalls. Meanwhile, significantly wetter winters are present in northwest Mexico and the southwest United States including central and southern California, while both cooler and wetter than average winters in northeast Mexico and the southeast United States (including the Tidewater region of Virginia) occur during the El Niño phase of the oscillation.

El Niño patterns are credited with suppressing hurricanes and made the 2009 hurricane season the least active in twelve years.

The lead up to the drought …
The current dry conditions cover 80 percent of the contiguous United States with at minimum abnormally dry (D0) conditions. The drought areas are similar to previous droughts in the 1930’s and 1950’s. The drought of 2012 began when a strongly positive Arctic oscillation and North Atlantic oscillation stopped winter storms from forming in the United States. In spring there was very little snow to melt and keep the ground moist. Droughts cause hardened ground, which causes fast runoff of rainwater when rain does occur. On the plus side, the dry soil contributed to a weak tornado season in 2012.

More than 1,297 counties in over 29 states in the US have been declared natural disaster areas as of July 18, 2012 as the drought spreads to 60% of the contiguous US.

In March 2012, one of strongest Spring heat waves on record was observed in many regions of North America. Beginning March 6, 2012, very warm air pushed northward west of the Great Lakes region, persisted for the rest of the month, and spread eastward. Eight record high temperatures were broken in March 2012. On March 15, 2012, a ‘Pneumonia Front’ — a rapid drop of air temperature was forecast for Chicagoland, but the warm air of March 2012 overpowered the front and held it near Lake Michigan in communities, such as Winnetka and Wilmette.

(a long stretch of warm air, but no RECORD HIGHS)

Impact of drought in coming weeks and months …

Dangerous heat waves
With at least six weeks of hot summer days still the norm, prolonged heat waves and dangerous temperatures are possible in July, August and even September. The heat waves could result in life threatening heat illness in vulnerable people.

Dangerous dust storms
Especially in rural areas where interstates pass through dry farm fields, severe dust storms are possible in our area in the coming months. The risk of crash pileups are a concern for highways and interstates such as I-39, I-57, I-80, I-88, I-90 and others. In the drought of the 1930s soil turned to dust and blew eastward in dark clouds called ‘black blizzards’ and ‘black rollers’ that ended up dumping soil into the Atlantic Ocean. Particularly strong dust storms occurred starting November 11, 1933, starting May 9, 1934, and starting April 14, 1935. The April 14, 1935 storm was known as ‘Black Sunday’ with reports of visibility diminished to 5 feet.

Air quality alerts
Elevated air particles and air pollution action days are likely to occur in the coming months. The action days could be exacerbated or compounded by dust storms.

Wildlife
Animals such as skunks, opossums, raccoons, and other wildlife are more likely to exhibit strange behavior as they seek water. They are more likely to take refuge under porches or other indoor areas looking for water or seeking refuge from the heat. Already animal wardens from communities are getting increased animal complaints regarding skunks, opossums, and raccoons. Skunks are more commonly being seen in daylight. Less than one week ago a raccoon was discovered with a drinking cup stuck on his face in a backyard in Scarsdale. 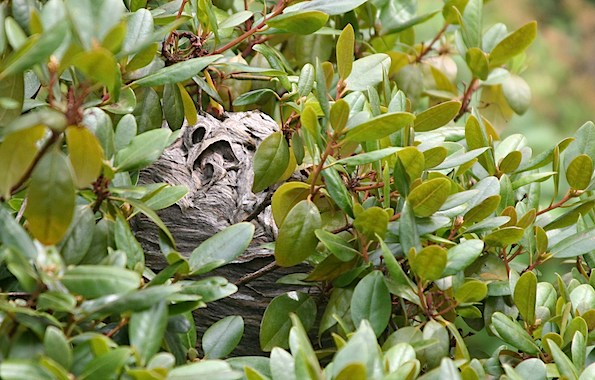 Hornet/yellow jacket nest only three feet off the ground in an Azalea bush in Arlington Heights, Illinois.

Insects
While nuisance mosquito bites might be down, there still have been reports of mosquitoes carrying the West Nile virus. The previous warm Fall, warm Winter, and warm Spring have increased other insect populations. Wasps and hornets have had more time to be active and to build their nests. Take extra caution looking for hornet nests and wasp nests on your property or whenever you are spending time outside. Wasps and hornets build nests in trees, in bushes, under eaves of homes, and in the ground — especially at the base of shrubs. Some nests can contain 5,000 or more hornets, which are protected aggressively by the hornets. Anyone gardening within six feet of a hornet nest is almost guaranteed a painful sting by one or more hornets or wasps. People allergic to venom from bees, wasps or hornets are at risk of anaphylaxis and death by a single sting. Multiple stings in a single occurrence can be fatal. Accidentally disturbing a nest, especially breaking the nest, could kill a person who is not even previously allergic to the venom. Hundreds or thousands of wasps or hornets could exit a disturbed or broken nest and sting a single individual or multiple individuals. Also, watch for dogs that are curious about wasps flying into their nest at the base of shrubs. Some wasp nests are underground.

High food prices
Economic analysts with the USDA have forecast a 3 percent to 4 percent increase in food prices for 2013. Beef may rises as much as 5 percent because of diminished supply of corn.

The Cardinal So What Happened to the Pneumonia Front? It’s the Spring Fever Slammed the Back-Door Front