VIDEO: Scene after at least six people were injured in a rear-end collision in the westbound express lanes of Palatine Road, just east of Wheeling Road.

Prospect Heights firefighter/paramedics responded about 2:00 p.m. Wednesday to a report of a three-car crash with victims trapped in vehicles in the westbound express lanes of Palatine Road, just east of Wheeling Road. First firefighter/paramedics on arrival reported at least seven people injured, but no extrication required. Witness reported some victims were lying on the street.

An extra alarm for ambulances was requested about 2:06 p.m. The crash was in Wheeling jurisdiction. Firefighter/paramedics from Arlington Heights, Buffalo Grove, Glenview, Mount Prospect, Prospect Heights and other communities assisted Wheeling firefighters.

Some victims were transported to Advocate Condell Medical Center in Libertyville. Possibly six victims transported with some refusals. 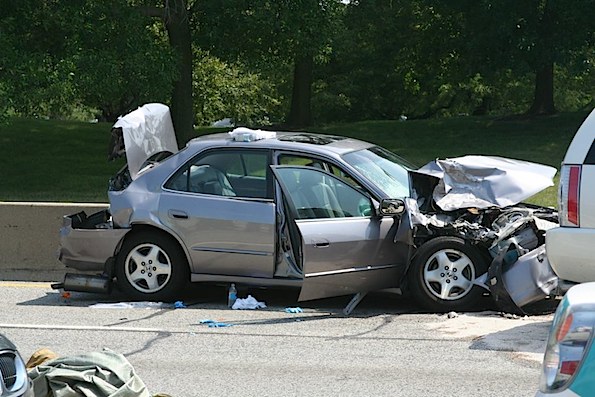 Heavy front-end and rear-end damage to the middle vehicle of a three-vehicle crash on westbound Palatine Road, just east of Wheeling Road (Over 50 more photos on Facebook.com/CardinalEmergencies).