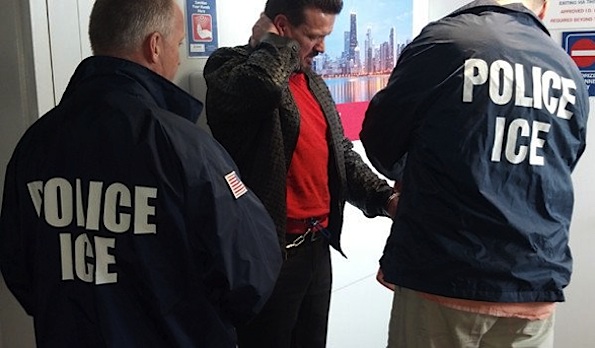 CHICAGO – A Polish national who is wanted in his home country for racketeering, extortion and battery was deported and turned over to Polish law enforcement officials Tuesday by U.S. Immigration and Customs Enforcement’s (ICE) Enforcement and Removal Operations (ERO).
Slawomir Grymuza, 49, was flown from Chicago to Warsaw, Poland, on a commercial flight July 9. ERO officers escorted Grymuza on the flight and turned him over to the custody of Polish authorities July 10 upon arrival at the Warsaw International Airport.

An Interpol notice was issued for Grymuza Nov. 4, 2009. He was being sought in Poland to serve a prison sentence for his criminal convictions of racketeering, extortion, fraud, battery and beating causing bodily harm.

According to the Interpol notice, the circuit court in Bydgoszcz, Poland, issued an arrest warrant for Grymuza March 29, 2006. Between November 1994 and January 1995 he used violence and threats against four individuals on various occasions to extort money from them. In September 1994, Grymuza kidnapped a man from his residence and beat him with a baseball bat, causing serious injuries, while demanding payment for a debt. Grymuza was found guilty in April 2001; he was sentenced March 6, 2002 to serve four years and two months in prison.

Grymuza, who was residing in Arlington Heights, entered the United States Oct. 9, 2006 on a temporary visitor’s visa. He remained in the United States illegally after his visa expired. He was in the process of adjusting his immigration status based on his marriage to a U.S. citizen when ICE Homeland Security Investigation (HSI) was notified of the outstanding arrest warrant in Poland. On April 9, 2012, HSI and FBI agents arrested Grymuza and he was placed in deportation proceedings.

“This individual attempted to escape justice and a prison sentence in Poland by hiding out in the Chicago area,” said Ricardo Wong, ERO Chicago field office director. “On a daily basis, ICE protects public safety by arresting and removing international fugitives who pose a threat to our communities.”

Since Oct. 1, 2009, ERO has removed about 455 foreign fugitives from the United States who were being sought in their native countries for serious crimes, including kidnapping, rape and murder. ERO works with ICE’s Office of International Affairs, foreign consular offices in the United States, and Interpol to identify foreign fugitives illegally present in the country.