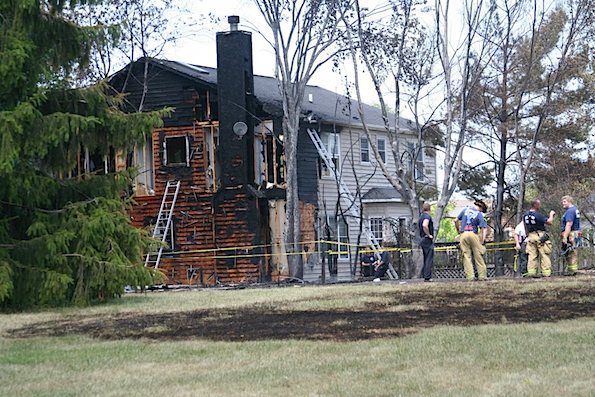 Serious fire damage at the back of a two-story home on Grey Fox Court (Over 170 photos on Facebook.com/CardinalEmergencies).

Streamwood firefighters and police responded about 10:40 a.m. Saturday to a report of a fire in a shed that spread to a two-story home in the 100 block of Grey Fox Court. The fire destroyed a shed and spread along dry grass to the back lot of the home. The fire seriously damaged the back of the two-story home. Damage estimate is about $250,000.

During firefighters operations, the beginning of a cold front began to knock the temperature down from 97°F at 9:51 a.m. to 91°F at 10:51 a.m. and to 88°F at 11:51 a.m. — still hot conditions for firefighters in bunker gear and personal protection equipment. The wind also shifted from northwest to east northeast during firefighting operations.

One firefighter was transported to St. Alexius Hospital with a heat-related illness. A fire rehab area with mesh-ventilated chairs was set up across the street from the fire in the shade of parkway trees. Extra rehab units were called to the scene because of the hot weather. Usually one paramedic ambulance and a paramedic crew serve as a firefighter rehab unit at the scene of extra alarm fires.

An extra alarm for a fire investigation team was also checking for a source of the fire, including the possibility of fireworks.